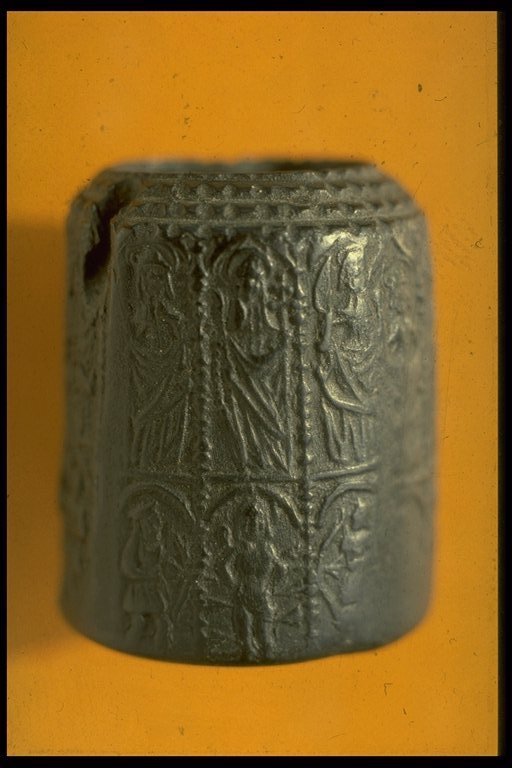 In medieval London, there were many tools that professional scribes were expected to have at their disposal. During the late medieval period, parchment was the main writing surface. The making of parchment from the skin of sheep or calves was a long and involved process, sometimes taking a parchminer weeks to prep and stretch the skin for use. Scriveners wrote on parchment or paper using quills taken from the wings of swans or geese. Literate people were expected to be able to prepare their own pens by making a series of cuts on the quill’s tip. While quills were relatively straightforward for a medieval scribe to procure, the quills then had to be dipped in ink, which required much more expertise to create. The most common type of ink was iron-gall, which was made out of oak galls produced when wasps lay eggs in budding trees. The galls, which are rich in tannic and gallic acids, are collected, crushed, and later infused with ferrous sulphate and gum arabica (sap from the acacia tree) producing a dark black ink.

The tool exhibited here (Fig. 1) is the vessel used to hold this precious ink, the inkwell. Just as the other tools of the trade had to be made by specialized craftsmen, so too was the inkwell. Often made from cow horn, the production of inkwells was thus delegated to medieval horners, who formed professional guilds in London and York. These horners usually processed animal horns through prolonged steeping in water, creating flat sheets that were often sold to craftsmen who then made the completed product. The production of drinking vessels, however, was reserved for specialized horners. Drinking vessels were made by heating a sheath and forcing the horn into a standardized shape and then cutting a base plate that was fitted into an incised groove to form the bottom of the vessel. As many inkwells were produced in much of the same way (although some were made from entire horns), it is likely that horn inkwells were also made by the horners themselves.

With the quantity and expense of all these materials used in scribal work, as well as the lack of literacy in medieval populations and the technical education necessary for proper handwriting, it makes sense that writing too, was delegated to a specialized craftsman, the scribe. The who and how of scribal work changed vastly over the medieval period, and thus so did the role of the inkwell. Before the eleventh and twelfth centuries private ownership of books was very rare and most manuscripts were produced in monasteries for their own libraries. At this time, books were very expensive and largely religious, and thus an item denoting prestige that the average Londoner could not afford. By 1100, however, due to rising literacy in medieval populations and thus increased textural production, monasteries began hiring secular professional scribes in order to keep their libraries up to date. By 1300 even most monks purchase books from commercial scribes like everyone else. 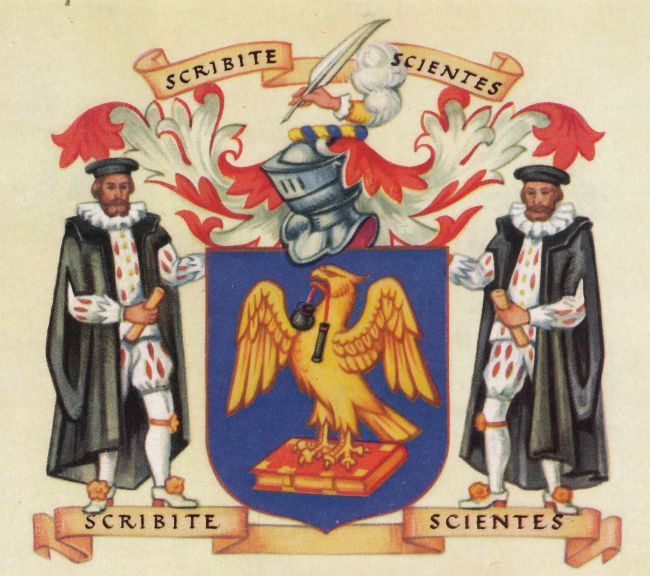 (Fig. 2) Coat of Arms for the Worshipful Company of Scriveners, London. Notice the portable inkwell in the mouth of the golden eagle.

During the later medieval period, writing was almost completely left to professional scribes and scrivener workshops which could be found clustered around churches and marketplaces in most larger towns. In London, for example, most scriveners and stationer workshops were concentrated on the London Bridge and most prominently on Paternoster Road, which became an ecclesiastical hub for stationers selling religious texts, creeds, and graces. Scriveners were tasked with drawing up deeds, wills, and legal documents, and were available for hire to most of the merchant class, many of whom lacked the skills to produce these records by themselves.  Documents show the Worshipful Company of Scriveners (Fig. 2) (originally called the Mysterie of Writers) petitioning Edward III for exclusive rights in the scrivener trade in London as early as 1364. Many guilds employed their own professional scribes, feeding the demand for scrivner services due to the increasing need for guilds to document their business and communicate with the crown. The number of scriveners in London thus increased in tandem with the rise of guilds; in 1420 records show less than 10 scriveners working in London, by 1440 that number had quadrupled. 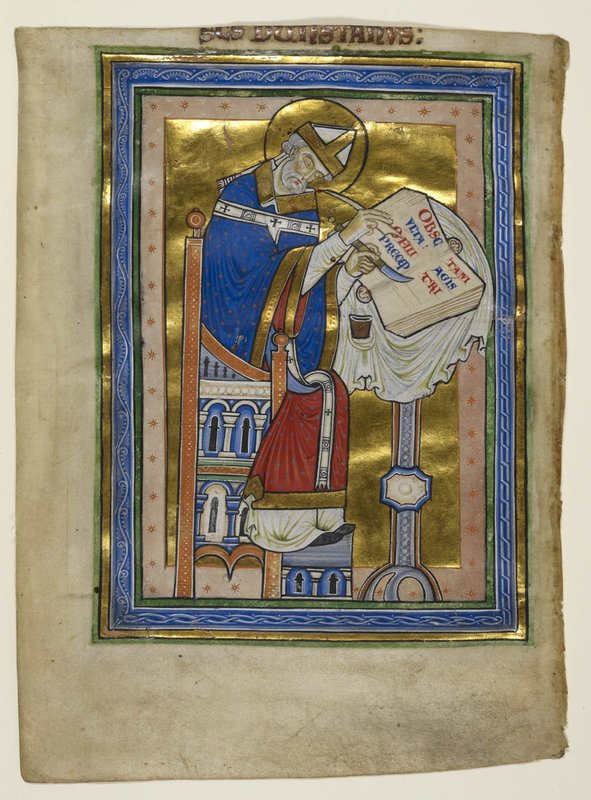 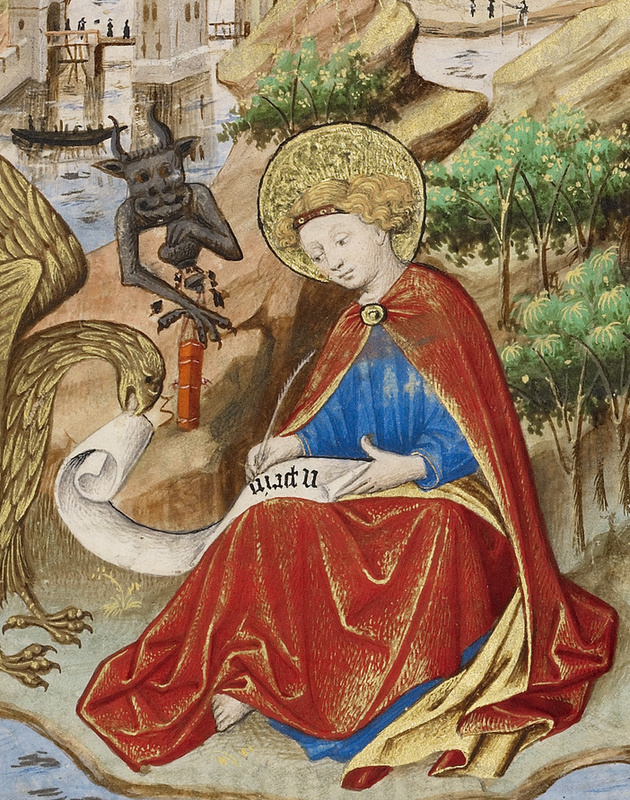 This inkwell, on display at the Museum of London, exemplifies this shift in the role the scribe in medieval life. In the workshop, inkhorns were generally inserted into a hole in the desk as seen in Figure 3. Our inkwell, however, standing only 48mm tall by 36 mm wide, is a portable inkwell as made clear by both its size and the two holes at its rim for suspension. This is important as in the late fifteenth or early sixteenth century, when this inkwell was made, writing was no longer confined just to the monasteries, making these such portable inkwells essential for itinerant scriveners who oftentimes did not have access to workshops. Portable inkwells often had a screw top with a cord attached to a penner (essentially a quill case), as seen in Figure 4, and were usually attached to the belt. This made them much more practical for a scribe who was expected to move between guilds and courts doing various jobs for other Londoners.

While a portable inkwell in this period was just as likely to be owned by a common scribe working for a guild as it was to be owned by a religious scholar in an abbey, the decoration on this inkwell seems to indicate that it was not owned by just any scribe. Intricately carved with religious figures, including that of the Virgin Mary and figures of the saints, the level of detail and craftsmanship in this inkwell shows that it was likely owned by a wealthy or prominent individual, possibly the personal scribe for a wealthy guild, or considering the religious themes, a higher up cleric or friar. Unlike other inkwells that would be kept in the workshop, that fact that this inkwell was portable, and thus would be displayed prominently on one’s belt, made it at once a practical tool and a status symbol. Although reading and writing were more common during this time than previously, developing the refined script of a professional scribe required a considerable skill and education that would only be available to a select few. This explains the care taken when creating the inkwell, as it would have been displayed and flaunted as a sign of superior education and skill.

The British Library. “How to Make a Medieval Manuscript.” Accessed September 26, 2019. https://www.bl.uk/medieval-english-french-manuscripts/articles/how-to-make-a-medieval-manuscript.