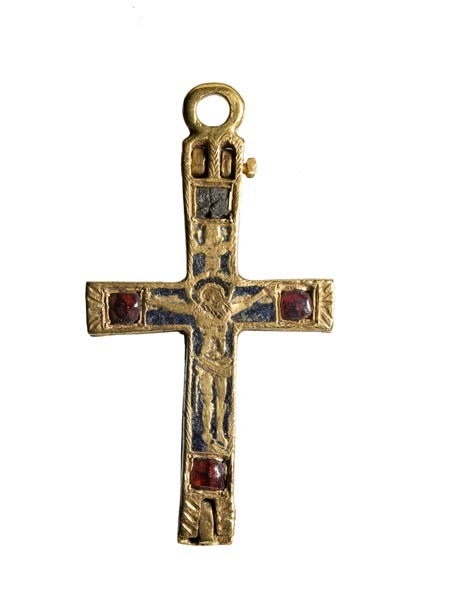 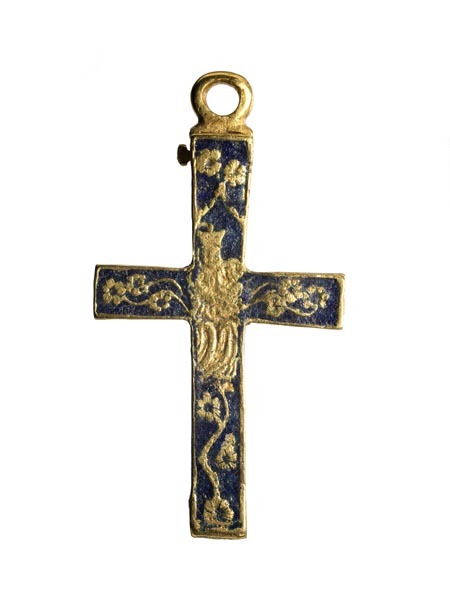 Relics and the reliquaries that enshrine them have been a lasting focus of public and private devotion since the early days of Christianity. Relics were objects believed to embody some of the holiness of the particular saint they represented and were thus supposed to cross the bridge between the saint in heaven and the faithful on earth. Relics were particularly valuable in Christendom and were highly sought after. In early Christianity, relics were taken from pilgrimage sites as mementos, but in the medieval period, most relics came under the possession of the Church. Obtaining a particularly prestigious relic was a source of honor for a religious institution, which placed them in a prominent position in its church.

As Christian relics were held to be valuable, the reliquaries that held them were expected to imitate this value through precious metals and stones, which made relics even less accessible. However, reliquaries made of valuable materials conveyed the importance and power of the relic within it and acted as a conduit for the prayers of the faithful. The power of the saint was transmitted to those praying to them through the act of veneration, which for the powerful meant touching or kissing the reliquary, and for the average Christian meant bowing to it. As a result, the reliquary acted as both a shield for the relic and a conveyer of what was held inside.

Reliquaries also allowed the relic to be displayed, transported, and sometimes worn, as with this reliquary pendant. This pendant is made of gold and set with garnets, clearly alluding to the wealth of the owner of the reliquary. If this reliquary was constructed in London, it would have been a product of the Worshipful Company of Goldsmiths. Reliquaries were one of the many luxury products made by the Goldsmiths’ guild, including jewelry and other finery. Another reliquary produced by London goldsmiths for a private chapel is today housed in the Louvre Museum and is one of the best-known surviving devotional objects from the period. This reliquary does not, however, feature a hallmark, which was meant to identify the maker of the ware and was required on all products produced by the goldsmiths after 1363.

On one side the reliquary displays the image of the crucifixion, while the back has an image of the Virgin and Child. These figures are relief engravings, with the background enameled. The enameling process was one that would have increased the value of this reliquary, as the materials used were more expensive and the production time lengthy. Once a pin at the top of the pendant is removed, the cross opens and reveals an internal cavity containing a piece of wood set in wax. It is likely that the wood was believed to be a relic of the True Cross on which Christ was crucified: a powerful and highly sought-after class of relic in the medieval ages. At the top of the reliquary is a bale, where the chain would have been threaded through while the reliquary pendant was being worn.

This reliquary pendant is fifty millimeters long and twenty-seven millimeters wide, and it weighs slightly under eight grams. This was an expensive reliquary, and the prestige of the relic inside meant that this particular object was created for a wealthy owner. Often reliquary pendants of the True Cross were worn by bishops during the mass; however, as the original owner is not known, it is possible that the reliquary was an object of personal devotion for someone of great wealth. Reliquaries were often gifted, as canon law did not allow relics to be purchased in an effort to maintain ecclesiastical control over the trade and police the authenticity of relics. Relics of ‘great significance’ were also forbidden to be traded permanently without the permission of the Apostolic See. As this relic was supposed to be a relic of the True Cross, it would have been considered a relic of great significance and thus was unlikely to be owned by a non-cleric.

Most medieval reliquaries were in the form of a casket, but many medieval reliquaries attempted to mimic the relics they enshrined, such as busts or hands. Larger reliquaries would have been carried in a procession through towns and villages on the feast day of the saint the relic was related to for veneration, especially if the saint was a local or patron of that town or village. Monastic communities retaining relics of prominent saints often used these relics as a site for pilgrimage, generating revenue. In these circumstances, the reliquaries would have had to be very ornate to reflect the perceived holiness and importance of the relic inside. Since this relic was much smaller, however, it probably would not have been available for public veneration and was instead likely used for private devotion and as a symbol of the prestige of the person wearing it. Wearing this reliquary would have immediately implied the status and devotion of the wearer. It was believed that relics, especially those related to Christ himself, were imbued with great power and conferred honors and privileges upon the holder of the relic. This relic would have immediately classified the wearer as a powerful and pious person, functioning to give authority to the wearer, especially if the owner was an ecclesiastical leader.

Though it can be inferred that this reliquary was initially in the possession of a high-ranking Church official in England, its original owner is unknown. However, it has since come into the possession of the Museum of London through The Art Fund, a group that helps museums and galleries acquire works of art to make them accessible to the general public. The question then becomes: how has an object of devotion become an artifact in a museum? The answer lies in the perceived value of the object. As medieval reliquaries have increasingly been studied for their artistic component due to their ornate decorations, they have been transmitted from a source of religious devotion to a secular work of art. As a result, they have become a prime target for collectors of medieval art, and their composition of precious metals and stones give them an inherent fiscal value. However, interest in relics remains a prominent tradition within Orthodox and Catholic faith communities, and many churches still retain relics and reliquaries as sources of pilgrimage and devotion. 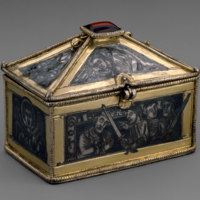 This gilded reliquary casket, dated to the years immediately following St. Thomas Becket's canonization, display a narrative of Becket's life and martyrdom. Reliquaries often were used to assert the sanctity of the saint they were said to contain, as this reliquary casket does with Thomas Becket. 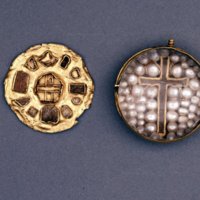 A thirteenth-century Scottish reliquary pendant, possibly made to be worn by the Bishop of Galloway. The gold mounted wooden cross was believed to be a relic of the True Cross. The domed rock crystal cover magnifies the size of the cross and pearls that surround it, alluding to the perceived importance of the cross in the center as well as acting as a display of wealth. 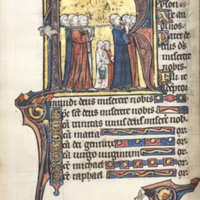 Thirteenth-century French manuscript illumination from a psalter depicting a reliquary procession. Processions like these were often performed in medieval European towns and villages on the feast days of the saints whose relics were contained in the reliquary. Though some reliquaries were personally owned, far more were in the possession of Church leaders, as this image suggests. 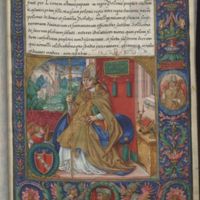 This sixteenth-century manuscript illumination depicts a Polish bishop wearing a chest cross that appears similar to a reliquary pendant. Reliquary pendants were often worn by prominent members of the clergy to indicate their high status and individual piety during public events, such as masses.