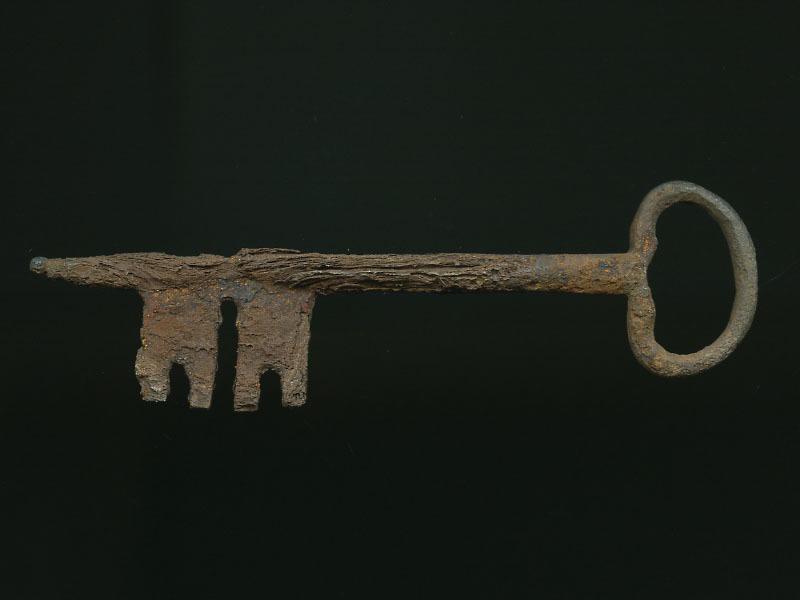 This key from the fifteenth century is made of iron and is about 118 mm long. It has a kidney-shaped bow (the part at the top of the key) and a simple bit (the part inserted into the lock), forming a right angle with the shank.[1] Its iron material distinguishes it from other keys made of copper alloys, though iron is more common. It belongs to a group of keys that are roughly this length while a shorter group is closer to 30 mm. Its length and shape help to classify it as a door key.

The key’s group is called 7A (or G1), which refers primarily to the shape of its bit. Casket keys are smaller (around 30 mm), while padlock keys are sometimes longer and have a smaller bit (fig. 2).[2] The kidney-shaped bow helps date this key to the fifteenth century, with circular and heart-shaped bows more common in the thirteenth and sixteenth centuries respectively.

Iron was by far the most popular material for keys, though copper alloys were also used. Two bone examples have been found but are not definitively classified as keys. 7A keys were the most common type in late medieval England and continued into the post-medieval era. Ian Goodall has charted the use of key types in England over time (fig. 3).[3] Its type A classification, which refers to the downward-directional bit, predates the more complex inward mechanism of 7B keys (fig. 4). Notably, the bit on this type A key is symmetrical, allowing it to be used from either the inside or outside of the door. Earlier lock technologies, including latch mechanisms, could only be operated from the inside. Later, sixteenth-century keys were once again side-restricted by their asymmetry as well.

Sales of simple keys like this were recorded in accounts kept by religious and secular institutions and lords and contain information about customers and prices. The price for a door lock – one was sold for 5 pence in 1342, roughly a day’s earnings for a skilled laborer – and the quantity of finds suggests that keys like this were also available for domestic use. They would have therefore been the most complex piece of machinery owned by a household. Keys of this type gained popularity in part because they were cheap to manufacture. Cheap manufacturing costs are demonstrated by the iron quality; complaints about iron being lost in the smelting process are found in sales of locks and keys.[4] Various trades are required to manufacture such a key, including specialized tradesmen. A guild of “lockyers” in London is listed in 1422, but often keys were repaired by more general iron workers.[5][6]

English key types also vary by region. For example, fourteenth-century keys in London differ from the type 7B found in Winchester from the same period. Throughout the medieval period, keys from England were considered especially high quality compared to those in continental Europe.[7] A group of keys found in Salisbury offer the most defined dating for English key technologies, but this dating does not necessarily match that of London keys.

Keys also symbolized access as a whole, as shown in the illumination of Jesus and Peter (fig. 5), in which the key represents access to heaven. The 1265 story of the murder of Symon of Wynton includes a key to demonstrate a servant’s connection to his master’s home.[8] The Luttrell Psalter (fig. 6) also contains an image of a man fighting a dragon while holding a key which resembles type 7A, one of the most popular in medieval England.[9]

Keys were often manufactured to appear more complex than they mechanically were.[10] However, keys were not considered a symbol of status or fashion.[11] This suggests a psychological aspect of security was manufactured into keys, even if the complexity of lock technology was not there to match. Skeleton keys from this period have also been found, suggesting an accompanying lock-cracking industry, though not necessarily a criminal one; skeleton keys could also have been useful to heads of households or locksmiths themselves. In that sense, door keys had a gendered element, privileging access for men.[12] However, the illumination of a woman holding a keyring (fig. 7) suggests this was not universal. This key, a cheap domestic door key from the fifteenth century, represents a sense of security for the owner. Even if the key had more monetary value than the objects in the home, the emotional value to the owner must have been great. 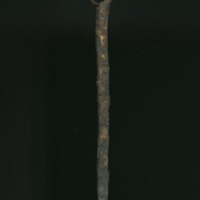 Fig. 2. This is a padlock key, which was used for objects or hanging locks rather than set door locks. 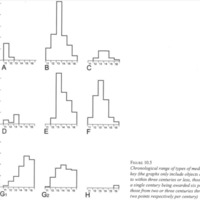 Fig. 3. These graphs suggest frequencies of use for various types of keys in England. The bottom axis shows the period from the eleventh to sixteenth centuries, and the vertical axis shows the relative frequency. 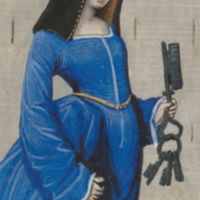 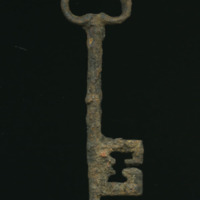 Fig. 4. The bit on this key has inward-facing mechanisms, which became popular in 16th-century London. This key type is also more frequently found in the town of Winchester. 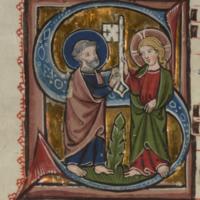 Fig. 5.  This image is from the margins of a piece of sheet music. It shows the use of keys as symbolic for entry or control (Regensburg Antiphonary, MS Walters 754 B r). 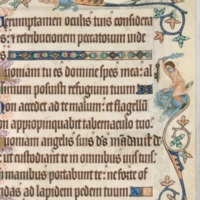 Fig. 6. The depiction of a dragon-fighter holding a key suggests that keys symbolized power. The key also resembles a type 7A key, showing its popularity in England. The image comes from the Luttrell Psalter (BL Add MS 42130 f. 166 r).

Eras, Vincent J.M. Locks and Keys Throughout the Ages. Kent: Bailey and Swinfen, 1974.

Salzman, L.F. Building in England Down to 1540: A Documentary History. Oxford: Clarendon Press, 1967.

Yan, Hong-Sen. “A Study on Western and Chinese Locks Based on Encyclopedias and Dictionaries.” In International Symposium on History of Machines and Mechanisms: Proceedings HMM2004. Edited by Marco Ceccarelli. Dordrecht: Kluwer Academic Publishers, 2004.