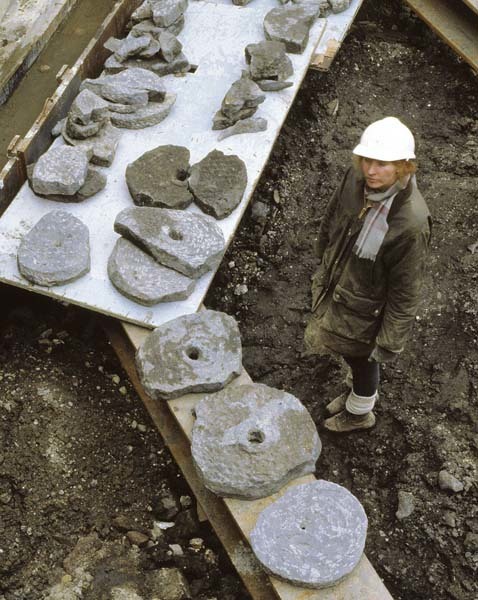 Archaeologists discovered these quernstones, made from hardened basalt lava, in what they now believe to be a rubbish deposit on the south bank of the Thames near Southwark Bridge. It is one of the largest collections of quernstones ever found, and provides insight into early medieval food practices, trade patterns, and London’s economy.

The quern is an ancient tool used for grinding grain and other foods, such as pepper. The British Museum houses querns dating from the Neolithic and Bronze Ages, and there are dozens of examples of Romano-British querns. The Museum of London dates the Southwark Bridge quernstones to the eleventh century, and most scholars place them in a Late-Saxon context. Since they were 50cm in diameter and had a small central hole, these querns were most likely rotary hand querns, which placed one round stone on top of another and rotated the upper stone to grind the grain in between. Rotary querns were more efficient than their predecessors, saddle and beehive querns, but less efficient than the large stones used in water mills.

Petrological analysis, which tests the mineralogical and chemical composition of rocks, can determine the origin of the stones. The quernstones discovered in London had come all the way from the Eifel region of Germany, an area well-known for its quernstones made of volcanic rock. These particular stones are typical of the exports from the Eifel region, where quarry workers cut the stones into their basic round shape prior to export. Traders, likely Frisians, then brought the unfinished stones, called blanks, to a workshop for the final stages of production.

Most of the stones from the Southwark site were fragmentary and unfinished, reflecting the practices surrounding their production and transportation. Basalt lava stones could break easily while traveling over water, so in order to minimize financial risk, traders transported only unfinished stones. The finishing process required a specialist to drill a central hole in the fragile stone, smooth the surface for grinding, and add a hole for the handle. Many of the stones from the Thames site are broken, suggesting that the assemblage represents the discarded materials of a nearby workshop. Although archaeologists know very little about these workshops, London is one of only a few places in Northern Europe where they have discovered the large collections of querns that signal the presence of a workshop. This demonstrates the city’s growing importance as a center for trade and manufacturing.

Many of the quernstones imported for processing would not have been used in London. After finishing, traders took the stones to other areas of England, such as Oxford and Norfolk, where they would serve as a primary or secondary means of grinding grain for a community. Most evidence for their use comes from rural settlements, where one quern might have served several families. Operating a quern frequently required two people, one to turn the handle and another to pour in the grain. The evidence is not conclusive on who normally used a quern, although some sources point towards both slaves and women. While there is no direct evidence, some scholars  imagine social networks forming between those who regularly used querns, just as field laborers sang while they worked.

Using a quern to produce flour was labor-intensive and inefficient. Scholars estimate that, with consistent grinding, a skilled quern-operator could have produced approximately six pounds of flour an hour. At this rate, communities that held querns in common would have needed more than one to sustain their flour supply, and thus several workers whose sole job it was to grind grain. However, the quern was not the only method of grinding grain, and some communities also had access to a more efficient water mill. William the Conqueror’s Domesday Book lists several hundred mills in England in the late eleventh century, which could have supplemented the use of hand querns. Because the evidence is primarily archaeological, it is unclear why the use of hand querns persisted even with expanded use of the water mill. Possible theories include that some rural communities did not have access to a water mill and that families may have preferred to have the ability to grind grain for themselves on short notice.

Quernstones can also provide further insight into early medieval beliefs and practices surrounding food. Workers had to anchor the stones in the ground, and would have likely placed them near a grain storage facility or oven. People often used querns in “grinding houses” whose sole purpose was producing grain. This organization suggests that communities constructed their settlements around maintaining the food supply, which was a constant and pressing task. In this context, a quern could symbolize the survival of the community because it was a necessary tool to produce food.

Biblical sources frequently use querns symbolically, and thus medieval manuscripts often depict querns in religious contexts. Old English sources drew on Biblical connections between the quern and the monotony of daily life and chores, as well as the revolutions of time. The endless turning of the quern represented the continual burden of producing food and the worldly needs of the community.

Basalt lava querns had the unique dual status status as both a utilitarian and semi-luxurious item. They had one of the largest geographical distributions of any imported items during this period, most of which tended to remain in cities. The presence of an imported quern in a community signified that it had connections to wider trade routes. Locally-made sandstone querns were less expensive, but the frequent discoveries of basalt lava querns suggest that people preferred them over sandstone. Basalt lava gives quernstones a distinct grey and white color, as well as a rough texture that provided a hard surface for grinding and limited the disintegration of stone fragments into the flour. Although basalt lava quernstones were widely available and not as prestigious as scholars used to believe, individuals or communities that paid extra for imported stones must have seen them as a status symbol that demonstrated their ability to pay for an everyday item of higher quality. The processes necessary to produce and transport these quernstones reflect their status as a luxury item, yet widespread and everyday use underscores their utilitarian value.

The value of a quernstone changed over the course of its production, development, and use. An unfinished stone that workers had just cut from the quarry had a relatively low monetary value, as the traders’ transportation processes demonstrate. This value increased once the stone made its way to a large city center and received finishing details in a specialized workshop. Once completed, traders brought the quernstones to communities where locals would value them for their ability to produce food and demonstrate the status of those living there. This value changed once again when querns ceased to perform their original function. Broken or worn out querns were no longer signs of wealth, and communities repurposed them as building materials and tools. It is in these secondary contexts that archaeologists usually discover basalt lava stones in England. The querns still had value as back-fill for post-holes, hearth stones, or knife-sharpeners. The Southwark Bridge quernstones are part of a long tradition of manufacturing, exchange, and operation that provides insight into how early medieval trade networks functioned, the variety of practices surrounding food preparation, and how communities determined value. 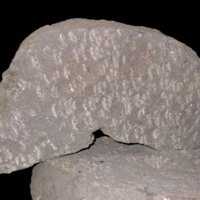 An up-close view of a quernstone from the Southwark Bridge excavations. The color and texture of the basalt lava is clear here, and rough edges demonstrate that the stone is unfinished. The central hole is where one worker would have poured the grain while the other turned the top stone over the lower one. 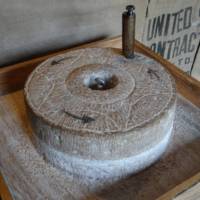 This image depicts a modern replica of a medieval quernstone. Notice the perfectly round shape and the attached handle. This is what quernstones would have looked like once the finishing process was complete. The arrows on the upper stone demonstrate the direction it would have rotated. While this quern is at waist-level, functioning medieval querns had to rest on the ground. 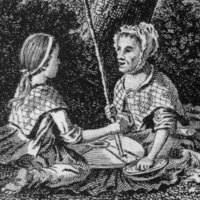 This eighteenth-century drawing depicts two women using a quern in the same way that medieval communities would have. One turns the upper stone using the handle while the other pours in the grain. 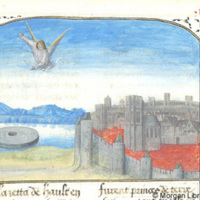 Querns and millstones appear frequently in Biblical literature. This image is an illustration of a passage from the Book of Revelation where an angel throws a millstone into the sea to symbolize destruction. Medieval sources, such as this manuscript, often show quernstones in their symbolic context instead of depicting their everyday use.