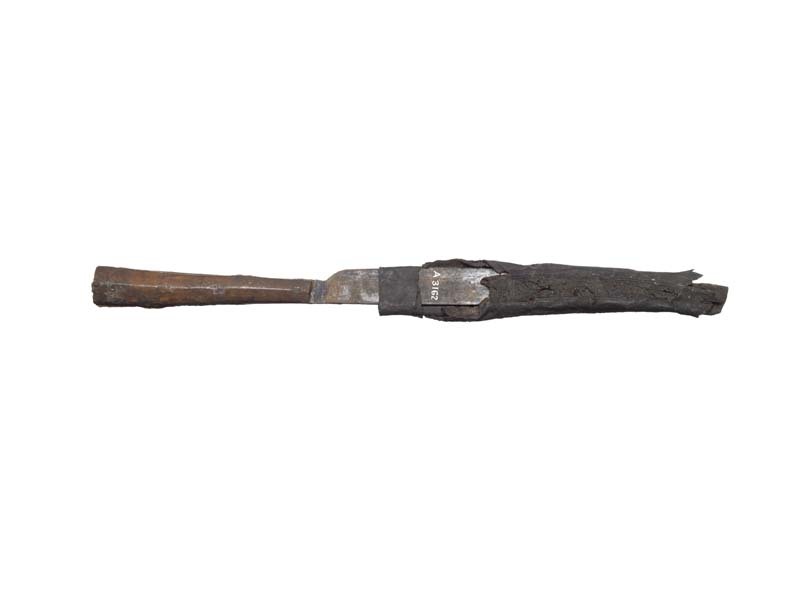 An argument could be made that the knife is one of the most important items of medieval times. Whether tearing through tough meat for dinner or using it to cut leather, without the knife, many tasks would have been impossible. This knife in particular was probably used when eating dinner. There are three parts to the knife set displayed here, which has been dated to the late fourteenth to fifteenth century: a scale-tang metal blade, a wooden handle, and a leather sheath.The knife is about 205 mm in overall length, while the sheath has a width of 20 mm and is 113 mm long.

The blade of a scale-tang was usually made with wrought iron, which has a very low carbon content and made the blade duller than regular iron. For a wrought iron knife to be effective, the blacksmith had to forge regular iron to the outside of the blade, known as a cutting edge. This in turn, made the blade of the  sharp enough to cut through meat. Blacksmiths did not use iron to make the entire blade because it was too expensive for them to produce on their own, so they relied on iron imported from Russia, Spain or Sweden. The finished blade would be sent to a bladesmith in order to be assembled. After the blade was finished the next step was to attach the handle. The bladesmith would collect the blade and handle and prepare it to be used. This knife has a scale handle, which is two pieces of wood that are attached together by three rivets made of solid iron.

Different materials were used in making this knife because scale-tang handles had many moving parts and thus separate pieces that came together to make the handle of the knife. In contrast, for the whittle-tang, the wood was placed over the blade. Some handles were made solely out of wood, horn or even bone. Composite handles, which combined different materials, were also occasionally made. This also allowed for more decorations as the handle was flat compared to the whittle-tang knives which were usually uneven and round. Wittle-tang knife handles were just one piece of material into which the knife was connected. The handles to the scale-tang knives were placed around the blade by connecting each side with rivets.

This knife does not have any noticeable decorations on the handle, but the sheath does. The sheath is the cover or place to store the knife when it is not being used, similar to the sheaves employed today for kitchen knives. Curriers made knife sheaths from leather. The process was an arduous enterprise; they even had to use knives to cut the leather. Step one in the process for making leather was for tanners to acquire the hide from butchers who had removed skins from animals they slaughtered for meat. If the skins were from cattle, they were acquired and washed by tanners who then eliminated any extraneous pieces of hair before soaking the hide in tanning liquor (usually made of oak bark), which preserved the hide and made it a uniform color. Fast-forward a year and it was ready to be sold to leather-workers like the currier who could then turn it into a sheath. The currier used his shaving-knife to cut out pieces of the leather he deemed suitable for the product. Like the handle, sheaths could also be decorated to the customers’ liking. After buying their knife, customers would purchase the sheath separately from the leatherworkers. It is possible that people could have bought an knife entire set together, but it was more likely for them to purchase separately like buying a case for your I-Phone today.

The sheath for this knife is damaged, but there are visible some small stamped circles decorating this sheath. In order to decorate leather, it first have to be soaked it in cold water because symbols and impressions can only be made when the leather is damp. Decorations were important because they differentiated the sheaths, often to the taste of the owner of the knife. Some people may have liked important symbols or flashy caricatures, sometimes with color. The sheath represented the personality of its owner, which was important for the customers when buying it.

Decorations are what made the knife. It gave it personality and meaning to fit the customer’s tastes and feelings. People in medieval London had a deep connection to their knives as both a practical, every-day tool and as an accessory that others could see, so they wanted to make the knife set (perhaps especially the sheath) represent their tastes and even status given the greater cost of the complete knife set. It may even have had sentimental value, enough to keep it for a long time. Since it was probably used regularly for eating, a family may have sat down and cut their food at dinner every night with the same knife, so that it became part of their daily routine, and became a part of the family. 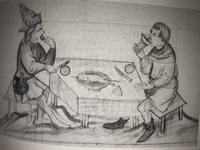 Th people in this image are using a scale-tang knife to cut their food. 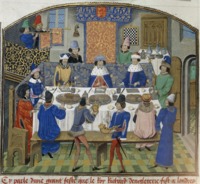 This image shows knives on the table at which King Richard II and others are dining.

This is a diagram of a scale tang knife. There are two scales that are placed on the knife, attached by three rivets that make up the handle. The shoulder plate is the divider between handle and the blade.

Cowgill, Jane and others. Medieval Finds from Excavations in London, 1: Knives and Scabbards. Woodbridge: Boydell, 2000.