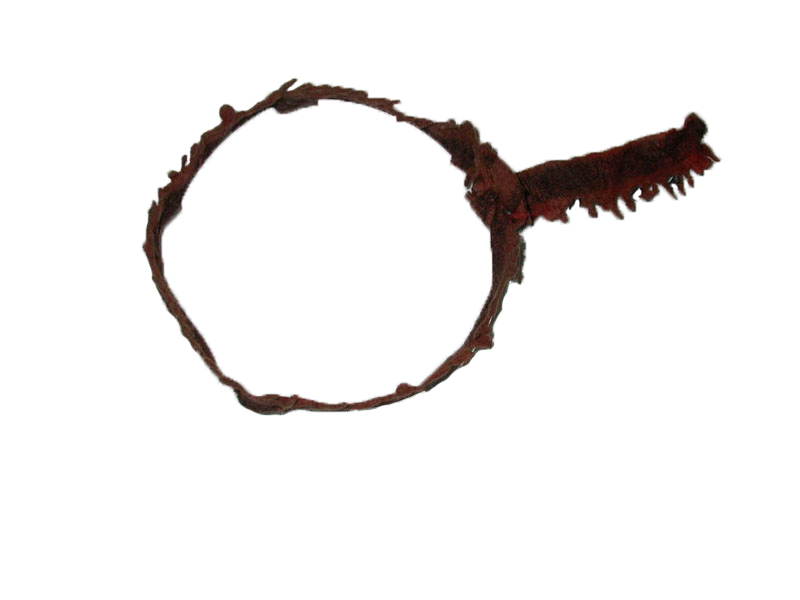 The garter was an article of clothing worn in medieval times by both men and women.  The garter was a band made of various materials worn around a man or woman's leg to hold up stockings or socks. As is the case with many articles of clothing, the garter served both fashion and function in medieval London. During the thirteenth and fourteenth centuries, this accessory was a staple in the wardrobes of many Londoners. One type of garter worn by Londoners was the fringed garter, manufactured from natural fibers such as wool, silk and leather. Garters were also often decorated with narrow wares, including ribbon, braids, strips of fabric, and red and black wool. Because a garter had to be fitted around a person’s leg to secure other articles of clothing, the materials used in the garter had to be strong and durable.

Garters also ranged in color and style. During the 1320’s, garters worn by men were known to be colorful and vibrant accessories, although they were also made in plain colors, such as black, white, and neutral colors. This fringed garter at the Museum of London measures 180 mm in length and 106 mm in height

During the fourteenth and fifteenth centuries, London silk women both manufactured garters and the silk materials used in them. They dominated the silk trade and were the main distributors of silk items in London. Although they never belonged to a formal guild, these silkwomen were consistently in control of the industry up until the sixteenth century when men eventually took over the business. Leather garters, on the other hand, were made by men who specialized in manufacturing leather accessories. Leather was made mainly from the skin of animals that were killed for their meat. The hides of these animals were then treated with aluminum salts and other materials. This process was known as tawing, and created a more flexible, stretchy skin aptly suited for wearing around ones leg. Woolen garters were also made from animal fur by London women. The most common animal fur used were from goats, rabbit, lamb, foxes and otters.

Despite both sexes utilising the garter, the accessory was more associated with men because it was visible on their bodies. Women wore garters in the same location as men, but their long dresses concealed them, thus giving medieval Londoners the perception that it was more widely used by men. Since women’s garters were not visible to the eye, there is limited information in regards to women's use of garters. On rare occasions, there is archaeological evidence, such as the silver garters discovered in the tomb of a Merovingian princess, believed to be Queen Arnegunde. By the 1320’s, garters became a very important accessory for men to wear because the male tunic became shorter and slit up the front, which revealed men’s legs.  Before the 1320s, cross garters were more popular; they allowed loose leg coverings to stay in place more robustly. Fringed garters were most likely to have been found in the possession of wealthy men and women due to the costs associated with manufacturing the object. Fringed garters were more ultimately considered a more dominant fashion accessory for men than women.

Fringed garters, being made of finer materials, typically indicated that the owner of the garter came from wealth. Factors influencing how expensive a garter was and therefore, how wealthy a person had to be to own the garment, including materials used, the color of the garment, and the intensity of the manufacturing process.  Some processes like tawing took weeks to complete. Silks and other fine materials took more time to manufacture as well, thus resulting in a more expensive product. Although garters were bought by individuals for themselves, they were also given as gifts to others. The practice of men giving women gifts such as gold fringed garters has been documented, which suggests that these garters had some emotional value as gifts between men and women, as well as being valued as a symbol of status. The significance of these expensive gifts, like the garter, was to demonstrate the commitment between a man and woman, as well as to show their wealth.  A garter, for a woman, was a more intimate accessory, while men would wear them for show and expression. By wearing a garter, men were able to display their high level of fashion, which became more important from the early fourteenth century onwards.

During social events such as dinners, assemblies and meetings, Londoners would dress up in their most expensive articles of clothing to show off their wealth and status.  Wearing expensive and elaborate garters as a fashion accessory was common among many London men seeking admiration from others for their taste and sense of fashion. The people who could not afford the finer fringed garters often wore garters of lesser quality, more simply made of cheaper materials. Garters of all types were a necessary clothing accessory worn by all who needed to hold up their socks or stockings. The fringed garter, however, served both as a display of fashion as well as an indication of one's social status. 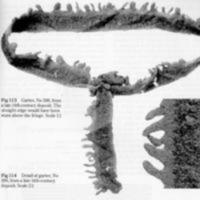 This garter is from the late 14th century. The straight edge of the garter was placed above rather than below the fringe. 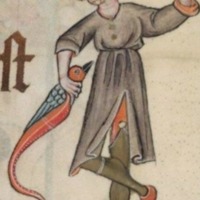 This is a detail from a medieval manuscript which depicts a man wearing garters (British Library Add MS 42130, fo. 60r)