This iron claw hammer, a tool used by medieval carpenters, was found near the river Thames and has been dated to between the fourteenth and fifteenth centuries. The hammerhead is 97 mm wide and 22 mm tall. The wooden handle most likely is made of ash wood, which was common for wooden tools. Fitted into the head of the hammer, the wooden handle provided a suitable grip and could be removed in order to replace it after deterioration. The hammer is designed with an iron claw at the backside of it in order to remove nails from old lumber. This feature played an important part of the construction process because new timber was expensive, so wood was often reused

The iron of the claw and head appears cold and grey, with small bursts of red rust that run along with its head across to the claw. To make the hammerhead, the iron was heated in a smelter, which changed the chemical composition of the iron. The heat and carbon within the smelter break down the chemical bonds of the piece of iron. The hot carbon strips away the oxygen atoms, leaving the iron in a purer form. In this form, the iron becomes much more useful. Once in this more malleable state, the iron could be fashioned into other objects such as weapons or tools. The blacksmith was the one who crafted iron tools and then would provide these tools to the carpenters for use, forming an economic relationship between these two trades.

This hammer was used during the early Tudor period. Some hammers even came fashioned with extended grips in order to use underwater. London Bridge wardens made distinctions between “land” tools and “water” tools. Carpenters could have switched handles depending on the work they were given, a very useful function on job sites.

Carpenters used their hammers to construct homes and other projects such as repairing the London Bridge and its properties.  They employed various woods; for example, elm was used for doors and shutters, which was a fixture on many Tudor era homes. Carpenters were given the dimensions of these homes and the amount of material required for the project.  Contracts for the construction of these homes reveal the materials involved: one contract specified principal posts measuring 14 x 12 feet for the bottom floor, 12 x 10 and  6 x 8 foot joists, and 10 x 8 foot wall.

During the late medieval period, carpenters were often members of a guild, a community of workers sharing similar trade and economic interests. Carpenters and other laborers during this period, predominantly male, joined guilds in order to ensure that their own interests were protected. The Carpenters of London had some kind of organization by the late thirteenth century.  In the mid-fourteenth century, Thomas Porteloye and 24 other carpenters were fined for breaking the first Statute of Labourers, a law that sought to keep wages at their pre-Black Death rate. London guilds also had religious functions, including a patron saint, and symbols associated with the craft, such as the hammer for carpenters, were prominent in the material culture of these fraternities.  Although the carpenter’s tools were many, the hammer became especially linked with the profession because it was always at their side and a key part of how carpenters conducted their trade. 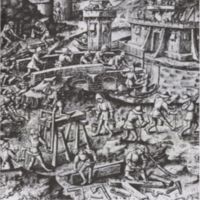 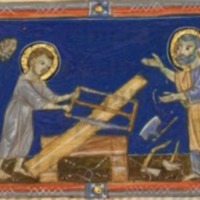 Jesus and Joseph sawing a plank of wood. A claw hammer is located near Joseph's feet. 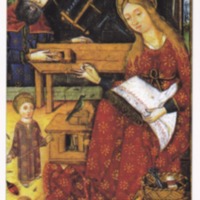 Carpenter (upper left) working at his bench alongside his family.  Click on the image to see the iron claw hammer located slightly above the man's head.

Schofield, John. “The Construction of Medieval and Tudor Houses in London” Construction History, 7 (1991): 3-29.