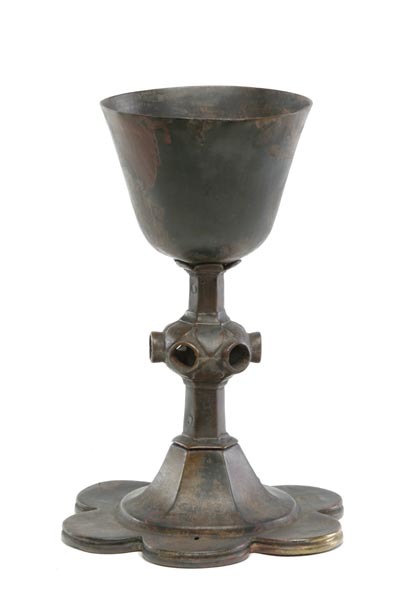 Chalices were essential to the ecclesiastical functions of the Catholic church in medieval London because they played a vital role in transubstantiation, or the conversion of the Eucharist and communion wine into the body and blood of Jesus. When celebrating mass, a priest consecrated wine and members of the parish came forth to imbibe in the holy qualities of the blood of Jesus. This process carried immense symbolic weight within the Catholic tradition. Indeed, the chalice itself was also held in high regard. Several sources indicate the care with which chalices were tended for and respected.

Another dimension of the chalice’s significance derives from the value attached to it by medieval Londoners. During the Middle Ages, churchgoers would not receive communion every time they attended mass. Rather, they would only be able to participate in the holy sacrament during Easter or on other special occasions. In turn, this sporadic exposure to communion meant that medieval Londoners most likely viewed the chalice as a mystical object imbued with great spiritual capacity.

Despite the chalice’s traditional uses within the church, it is probable that this chalice was not made specifically for Communion. This is due to the fact that this chalice is made of copper alloy—unlike other chalices from the period which were crafted using more expensive materials such as gold, silver, and pewter. As a result, it is likely that this chalice was created in order to be buried with a priest. The practice of burying priests with chalices, although religiously symbolic, was not exceedingly common in medieval London. This is a direct consequence of Christian beliefs in the afterlife—which were concerned with ensuring the soul’s ascension to heaven regardless of material possessions. Only several excavations have shown cases of priests being buried with a chalice, which likely was meant to symbolize the priest’s important role in the Eucharist, or sacrament of Communion. In some instances, priests were buried with both a chalice and a paten. (Fig. 2).

This chalice has an elegant design, with a thin hexagonally shaped stem and a base comprised of six petals. The base has a circumference of 130 millimeters while the total height of the object is 189 millimeters. The highly detailed base, known as a sexfoil, as well as the precise hexagonal shape of the stem points to the aesthetic value of this devotional object. A combination of the aging process and oxidation has given the chalice some semblance of rust. However, it has still aged remarkably well due to copper alloy’s inherent resistance to corrosion. The chalice, which has been dated to the end of the fifteenth century, was recovered near the London Wall, just north of the Tower of London. According to a map (Fig. 4) of the neighborhood surrounding the London Wall, the chalice could have been related to several different religious institutions: the parish church of St. Olave towards the Tower, Crutched Friars Friary, or St. Mary Grace’s Abbey.

Based on archaeological evidence, several assumptions can be made about the social life of the chalice. It is possible that the chalice was made in London near St. Margaret Lothbury in the northern part of the city. This site was no different from other late medieval metalworking sites in that it was located away from London’s most densely populated areas. This is because the noise and byproducts created by foundries led to the industry’s relocation in order to avoid disturbances. It is known that founders, craftsmen responsible for manufacturing cast-metal objects, worked near St. Margaret Lothbury from the fourteenth century onwards. It is likely that copper-alloy casting took place at the site; archaeologists were able to deduce this based on the presence of byproducts created during the casting process such as slag. Also, the remnants of molds used in the casting process further reinforce this assertion. Despite this knowledge of the chalice’s origins, it still remains to be seen how it ended up near the London Wall, nearly one mile away.

A crucial aspect of this chalice’s social life is how it changed hands on its journey to be used in a Christian burial. Although founders most likely created the chalice, they were not responsible for selling it to a religious institution. Instead, an ironmonger, a merchant who specialized in metal objects, bought the chalice and resold it in his shop. It is also worth mentioning that unlike founders and other metalworkers, ironmongers set up their shops in central locations within London. Therefore, it is plausible that the chalice was bought by a religious institution that was geographically close to an ironmonger’s shop.

The chalice’s status as a devotional object is even more consequential when placed in the context of the Catholic church’s vast influence at the time. The church would often provide food and lodging to those less fortunate when other mechanisms failed them. Additionally, the church’s benefits extended beyond the realm of social relations. In particular, the commission and construction of such magnificent artifacts as the chalice most likely had economic benefits as well. This consideration is especially pertinent on account of the makeup of London’s economic and trade activities during the medieval period. The mutual cooperation of these organizations ensured that commerce continued to flourish throughout the medieval period. As such, the use of the chalice played an essential role in the framework of society in medieval London. 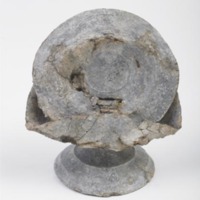 (Fig. 2) Lead chalice and paten buried with a priest  which was uncovered near St Mary Spital in Spitalfields. The chalice was created specifically for burial, not for use in the mass. 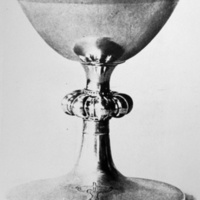 (Fig. 3) This is a burial chalice recovered from the tomb of Archbishop William de Melton in York. Dated around the mid fourteenth century, the chalice is made of silver and has an engraving of a crucified Jesus Christ on the base. 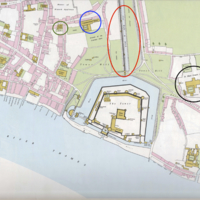 (Fig. 4) Map of neighborhood surrounding the area where the chalice was found (circled in red). Possible places of origination include the parish church of St. Olave towards the Tower (green), Crutched Friars Friary (blue), and St. Mary Grace's Abbey (black).