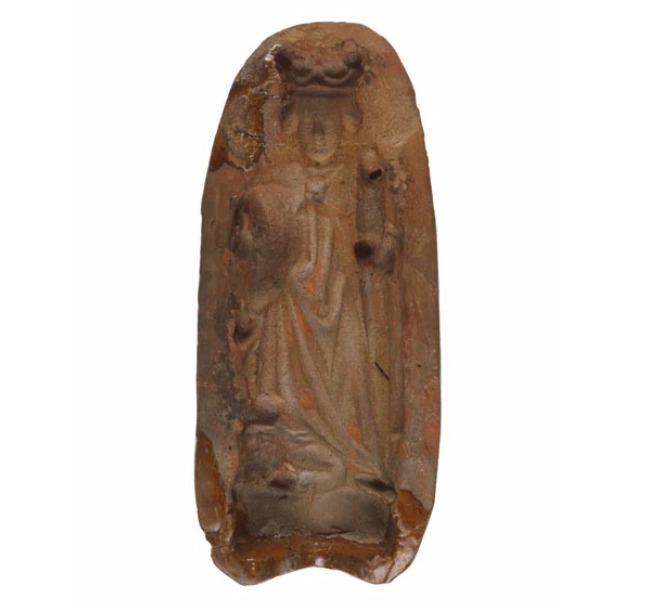 This sweetmeat mould from the mid fifteenth-early sixteenth century is made from handmade ceramic and impressed with the likeness of St. Katherine of Alexandria. More intricate designs on ceramic goods, such as the image of St. Katherine, would have been made with stamps of earthenware or bone [1]. Potters living in rural areas worked during the off seasons for farming [2], but urban pottery makers could afford to create pieces year-round due to high demand. The pottery industry in London focused mainly on specialty pottery goods. [3] Most likely, this mould was manufactured on the outskirts of London due to fire regulations since the kilns used to fire ceramic pieces could reach intense temperatures and exacerbated the constant threat of fire that plagued medieval London [4]. While ceramic pieces such as roof tiles are common archaeological finds in London, there is very little documentary evidence of the pottery industry in London, and potters had no guild of their own [5]. This sweetmeat mould is a much rarer archaeological find due to its unique design [6].

The term sweetmeat refers to dishes that included sweetening ingredients such as honey, sugar, various spices, or sweet wines. Popular forms of sweetmeats in the medieval era included marzipan, suckets (candied fruit peels), comfits (sugared spice-seeds), and various jellies [7]. Sweetmeat moulds were used to shape sweet pastes and doughs, such as marzipan, in the form of the desired image [8]. The sweetmeats created in her image were formed by pressing the marzipan dough into the mould. The moulded dough was then removed and placed on a sheet to be baked in the oven. [9] This process allowed for the sweetmeats to be mass-produced and sold on special occasions such as a saint’s feast day. Celebratory sweetmeats such as these would then be sold by vendors pushing carts throughout the city. [10] The mould is 170 mm long and 70 mm wide meaning that the sweetmeats it produced were small and easily carried during busy festivals. [11] Feast days were the few times a year that common working people were able to purchase sweetmeats that they could not make themselves such as marzipan or bisket breads, made with flour, eggs, and sugar colored with saffron. [12]

St. Katherine of Alexandria was an extremely popular saint in medieval England. She was the most prominent of the virgin martyrs, and often thought of as the ‘bride of Christ’ [13]. The influence of St. Katherine was evident throughout medieval London. A hospital bearing Katherine’s name was erected near the Tower of London by the Augustinian priory of Holy Trinity, Aldgate around 1148.[14] Additionally, a chapel dedicated to St. Katherine was built in the infirmary of Westminster around 1154. [15]. A main facet of the cult of St. Katherine was the legend that her preserved body secreted oil containing healing properties. It was said that Westminster Abbey was in possession of a vial of this oil collected by Edward the Confessor. [16] Her feast day on November 25th was widely celebrated amongst Londoners.

The main ingredients of sweetmeats, fruit, and nuts, were accessible to all classes in the medieval era.  [17] The less wealthy most often used apples and pears in the preparation of their sweetmeats. In order to create a sweeter taste, the fruits were baked, braised, or poached in sugary wines. These cooking methods had the added advantage of preserving the fruit. [18] This allowed the less wealthy to enjoy the fruit for a longer period. Wealthier people had access to a larger variety of fruit and were able to eat them during all seasons because they could afford to pay for fruits, such as oranges, to be transported from the Mediterranean. Furthermore, the wealthy had access to expensive spices and sweeteners such as sugar that were not available to the masses. The wealthy would order sugar hardened into the form of a loaf or a cone. [19] Sugar, however, was not widely available in England until the late eleventh century, and even afterward was a fairly rare ingredient in the medieval kitchen since it had to be shipped to Europe from the Middle East until the Caribbean sugar trade began in the early modern period. Instead, ingredients like honey or rosewater were incorporated into dishes to add sweetness. Besides their culinary value, sweetmeats also represented the wealth of those consuming them. Those who could afford to would hire specialized cooks who were tasked with creating delicious and fanciful sweetmeats for the household. In a record of ingredients purchased in 1265 for the Countess of Leicester, 60 lbs. of almonds cost 12s 6d. She also purchased a large number of luxurious spices including 6 lbs. of ginger for 15s, 1 lb. of saffron for 14s, and 12 lbs. of sugar for 12s. [20] Expensive ingredients such as these were key in creating elaborate sweetmeats for the wealthy.

Sweetmeats were both an indulgent treat and status symbol for people of the medieval period. In various forms, they were available to all classes and were especially enjoyed on feast days and holidays. For the poor, sweetmeats involving basic nuts and spices were a welcome deviation from their simpler diets. For the rich, sweetmeats were opportunities for extravagant displays of wealth. In both cases, sweetmeats were exciting fare that dazzled the senses.

This page from a 15th-century Italian manuscript depicts St. Katherine reading from her prayer book. In the image, Katherine holds the spiked wheel upon which she was tortured by the Romans. Katherine refused to marry the emperor Maxentius in favor of remaining a virgin to honor Christ. She was popular in medieval times as the patron saint of unmarried women. 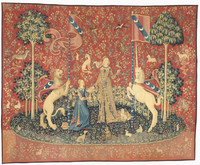 This image is a section of The Lady and the Unicorn, a French tapestry woven in 1500, which illustrates the sense of taste. In the center of the tapestry the lady is reaching into a small dish of sweetmeats. Most likely, the sweetmeats in this tapestry were made with sugar, an expensive and luxurious ingredient. The sumptuous nature of the tapestry demonstrates the affluence more complex sweetmeats represented. 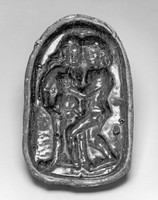 This item, although German in origin, is similar to the mould of St. Katherine in size and use. This mould is made from ceramic and coated with a lead glaze. Like the mould of St. Katherine, this would have been used to make a small sweetmeat loaf of marzipan or gingerbread. The image of this mould, however, is quite different from that of St. Katherine. The two lovers depicted are having intercourse and the mould may have been sold for the purpose of creating sweetmeats for weddings. Although their subject matters differ greatly, this mould emphasizes the range of occasions in which sweetmeat moulds were utilized. 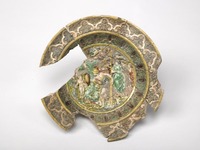 This Tudor era dish depicts the Roman goddess Minerva and Cupid. It was discovered at the site of the former Dominican Priory of Black Friars, indicating that even clergymen took part in opulent feasts and enjoyed rich food. This intricate dish may have been used to sweetmeats during banquets.