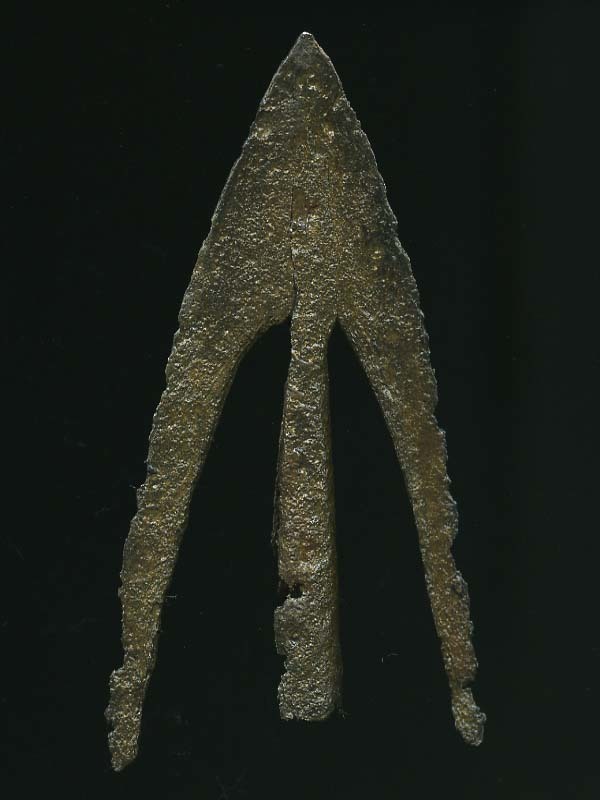 This hunting arrowhead, made of iron and manufactured in the thirteenth to fourteenth centuries, measures 84 millimeters long and weighs 13.7 grams. This type of arrowhead, called a swallowtail arrowhead, was used to hunt medium to large game such as boar and deer. The barbs are designed to make sure that the arrow stays in the animal as it runs, doing maximum damage and causing the animal to bleed out. The tradeoff for this effect is the size and weight of the arrowhead. This made it impossible to hit small animals, even at close range. The aerodynamics are such that, even after being fired out of a powerful longbow, the arrow would not remain on a consistent path for very long requiring the hunter to creep close to their prey or close the distance by other means during a hunt. This led to the practice, and art, of hunters stalking their prey and setting up raised platforms from which to shoot. 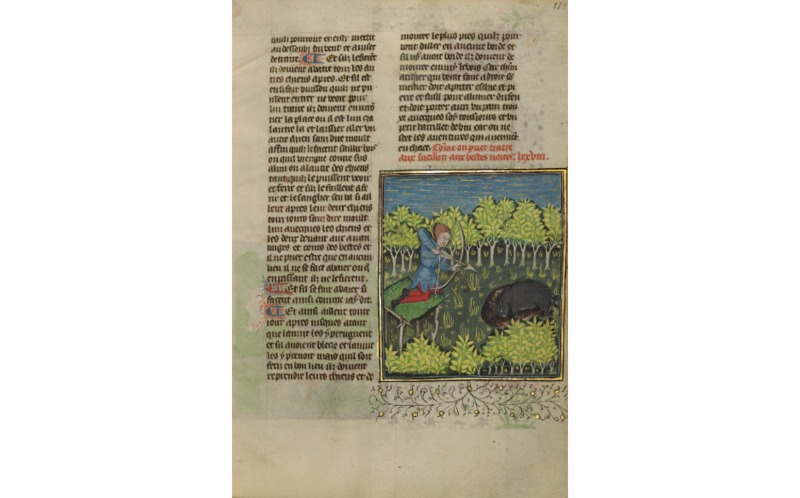 This page from the Livre de la Chasse manuscript depicts the hunting of a wild boar with a bow. The hunter stands on a platform that keeps him close to the boar. but out of the reach of the boar's dangerous tusks. He needs to be fairly close to his prety because his arrow, which has pronounced barbs, has a swallowtail arrowhead.

This arrowhead was likely used in sport hunting when large parties went out in search of a quarry. These hunts were designed to provide entertainment for the members of the gentry, who would have been the primary users of this item. This type of hunting was reserved for the elite of society as a show of status and wealth and was conducted inside a private park that was enclosed with an earth wall and wooden fence so that it could be securely stocked. Of the members of the freemen of London, the upper class of the population, only a minuscule number would have been rich enough to own property outside of the city. The general population of London, therefore, would not have been able to hunt. While there was poaching, it is unlikely that the poachers came from London and would have been able to lug an enormous deer all the way back to the city, even if they had the means and opportunity to kill it. William Fitzstephen mentions that the Londoners enjoyed hunting rights in Middlesex in the eleventh and twelfth centuries, a claim backed up in King Henry I’s charter to the city of London in which he grants hunting rights in the Chilterns, Middlesex, and Surrey. It is unclear, however, if these rights were retained into the late medieval period as they go unmentioned in King Edward II’s charter to the city, and feuds between the crown and the city in the time between these two charters had led to fluctuations in the privileges of the city. Even at their inception, it is unlikely these rights included large game because specific royal permission was required to hunt large game, especially deer. In any event, these rights would only have applied to the freemen.

This arrowhead could have been hand forged by a London blacksmith. Each arrowhead was created out of iron and designed for a specific purpose, such as warfare or hunting. When completed, the arrowhead was sent to a fletcher, who attached it to a wooden dowel along with fletching, feathers that are attached to the tail of the arrow for stability, at which point the completed arrows were ready to be bought or delivered and used. These blacksmiths were skilled tradesmen and would have been part of one of the many guilds of London. They were middle class and members of a guild, yet not rich enough to be able to make use of all the products that they made. It is also possible that this arrowhead was produced nearer to rural hunting grounds, although only the king and a few noblemen had the money to employ a blacksmith full time. 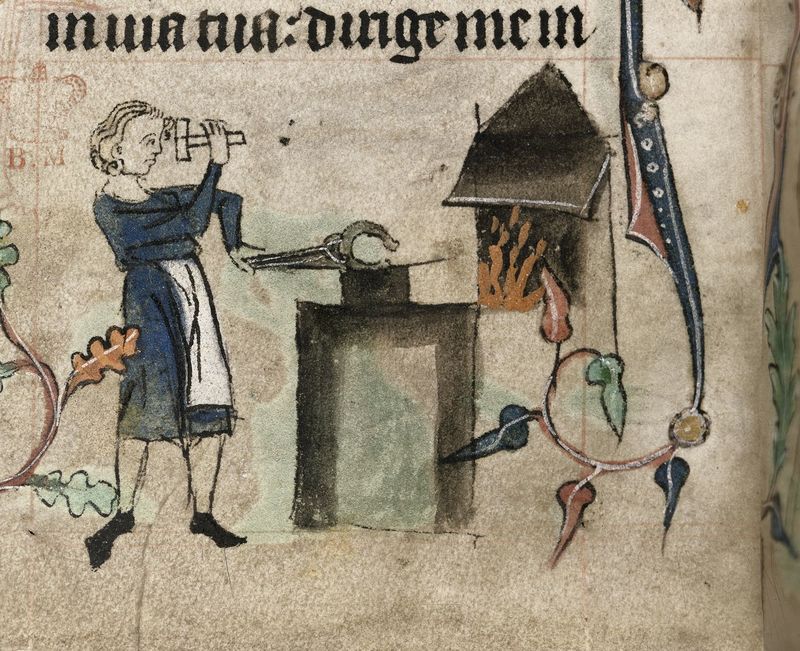 This manuscript illumination show a blacksmith working at a waist-high forge with a hand hammer. Although he is depicted as working on a horseshoe, he would have been capable of making a range of items and working with an assistant if necessary.

A chunk of iron became an arrowhead when it was created by a blacksmith. This chunk of iron, heated to 1200 ℃, was hammered by skilled and capable hands until it was of the correct shape. It was then finished, a process that involves sharpening and perfecting the final product. This arrowhead then went on to become part of another product, the arrow, which was the usable end product of the process. While this arrowhead required more iron than one meant for warfare because of the pronounced barbs, it was not significantly harder to craft than an arrowhead intended for war. Any increase in cost was also mitigated by the reusability of any arrowheads that could be recovered from a hunt. The price of this arrowhead is hard to assess as it would have varied based on the skill of the smith, the quality of the iron, and the year in which it was made and sold. While water-powered hammers existed in settlements located on a river it is unlikely that one was used to create this product because of the imprecision left by large hammers, even today, and the need for dexterity and control, which is better provided by a smith’s hand hammer.

The blacksmith trade included many different specialized roles. These men were skilled craftsmen responsible for creating objects for every economic sector. Working at their forges, set either into the ground or at waist height, a blacksmith would have been able to make everything from a horseshoe to a kitchen knife. The items which they specialized in making would have been held to a standard set by their guild. Blacksmiths worked usually in two-man teams, one smith and one assistant, although on some smaller projects they were able to work alone. This assistant could have been a journeyman or apprentice working in a master’s shop, a hired laborer who was not a member of a guild and was not training to be, or even the wife of the smith. As with other crafts, wives were an important part of the workforce working at the bellows or as an assistant, in addition to their duties as the woman of the household. It is likely that an arrowsmith, who was a blacksmith who specialized in creating arrows, crafted this product, and while his main objective would have been to prepare arrowheads for war, he would also have been hired to craft objects for sport during lulls in warfare and times of peace. 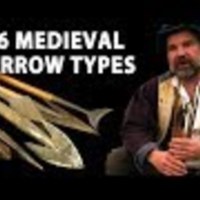 Tod of todsworkshop.com discusses six medieval arrowhead forms and how and why they were used with the English longbow in medieval Britain.

Brooke, G. Keir and S. Reynolds, “Henry I’s Charter for the City of London,” Journal of the Society of Archivists 4 (1973), 575-76; original in Liber Horn, f.362v. Text digitized by Stephen Alsford, "Charters of Henry III and Edward II found in John Noorthouck, 'Appendix: Charters,’ in A New History of London Including Westminster and Southwark (London: R Baldwin, 1773), 779-799," at British History Online.