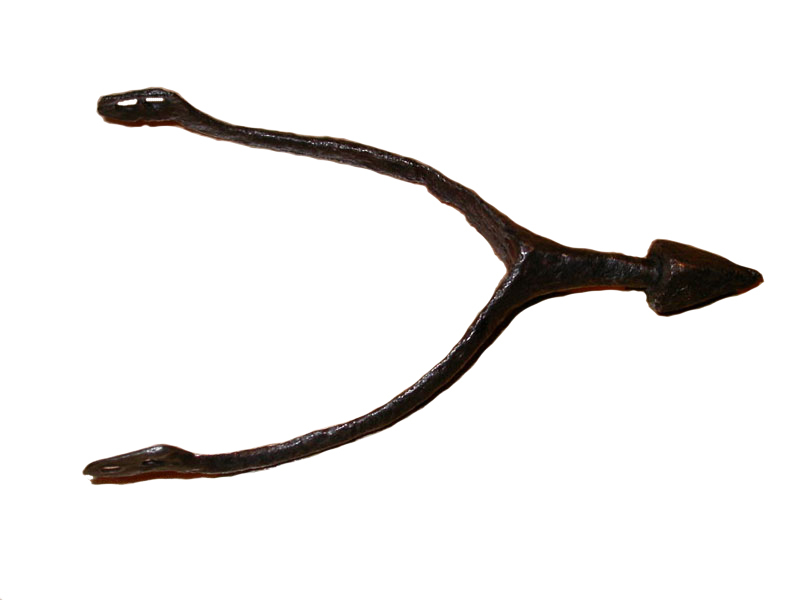 This prick spur is from the fourteenth century and is 143 millimeters long by 75 millimeters wide. It is made of iron; spurs made from this material were forged, whereas spurs made from copper-alloy were cast. Reddish glints in the image indicate that the spur may have rusted. Spurs were often plated with tin to prevent rust from forming, which also gave the spurs a shinier exterior. However, the layer of tin usually was not thick and has worn off many excavated spurs.

Iron deposits were present all over England, but even so, iron was often imported from Germany, France, Sweden, and the regions around the Pyrenees mountains. The raw ore was refined at bloomeries or at larger forge complexes to sift out non-iron compounds. This treatment involved cleaning the ore, roasting it, and then hammering and reheating the iron, after which the iron could be shaped into the final product.

Spurs are riding implements attached to the rear of the foot and used to prod mounts to prompt them to go faster. When used appropriately a prick spur would not injure a horse, though it could do damage if used harshly. Blanche Ellis and Geoff Egan claim that prick spurs only have one goad and assert that such spurs have been used by British riders since Roman times, possibly even before (127). However, Ann Hyland contends that some prick spurs in the Middle Ages had more than one point (The Horse in the Middle Ages 60).

According to the Museum of London, spurs were fashioned by spurriers, whereas loriners were responsible for producing bits and stirrups. The spurriers received their own guild in the 1200s, and their ordinances of 1345 prohibited spurriers from working after nightfall, forbade non-freemen of the city from practicing the trade imposed some regulations on apprenticeship, and prevented spurriers from working on Sundays (Memorials of London, 226-8).

According to Ellis and Egan, in the 1300s, many London spurriers worked by the River Fleet. Some worked on Spurrier Row near Ludgate; the modern name for this street is Creed Lane. They also mention that there was a road right next to the tournament site of Smithfield that was referred to both as “Knyghtryders strete” and as “Gyltesporstrete”; it’s now called Giltspur Street (124-125). John Schofield notes that there was a road in 1332 known as Gaysporelane whose name may have come from the lustrous spurs that might have been sold there (144).

Though I am unsure precisely where this spur was excavated, a majority of the spurs discussed by Ellis and Egan were discovered in or around the Thames River. On the one hand, discarded or misplaced spurs could have ended up in a stable’s refuse that was sent to a dump or fill located by the Thames. On the other hand, perhaps a spur was lost while watering a horse or exercising it by the river (Ellis and Egan 124).

Spurs were mainly worn by men; women could wear them, but spurs would have caught easily on a full-length dress. Also, such a dress would cover the spurs, so there was no aesthetic benefit to wearing them. But spurs seem to have functioned in part as a fashion accessory and status symbol for horsemen; for example, ceremonies conferring knighthood included putting on gilded spurs (Ellis and Egan 124). However, this spur is unlikely to have been gilded, as gilded spurs were generally made of bronze (Jope 36-37).

Spurs could be used in warfare, and there was quite a bit of English military action taking place in the fourteenth century, including wars with Scotland conducted by Kings Edward II and Edward III and in France during the Hundred Years War, which began in 1337 and lasted until 1453. Yet excavations of the middle of London during the Middle Ages have revealed bones from pack horses but no signs of war horses.

Spurs could also be used in jousts, which by the late thirteenth century had become more fashionable in tournaments than mêlée fights. Tournaments could be held to celebrate military triumphs: for example, Edward III held tournaments to commemorate wins on the battlefield against the Scots in 1333, 1334, and 1342. 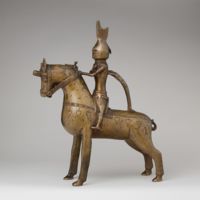 This aquamanile possibly hails from Lower Saxony and is made of bronze. Aquamaniles were used in both religious and non-religious settings, though this object's original owner is not specified. The knight seen here is wearing some kind of prick spur on his feet. 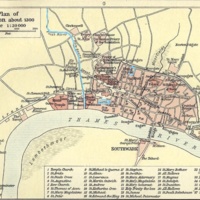 This map of London shows the city around the year 1300. Many spurriers in the 1300s were located close to the Fleet River, which has been traced in blue. Also circled in blue are the locations of Gayspurlane (between Cripplegate and Moorgate) and Knyghtryderstrete (south of St. Paul's). 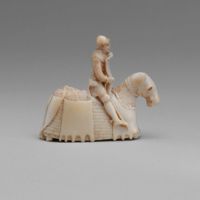 This ivory chess piece is an excellent example of the armor used to protect humans and horses after 1350. The knight can also clearly be seen wearing rowel spurs, which by this time, according to Blanche M. A. Ellis and Geoff Egan, had become more common than prick spurs.