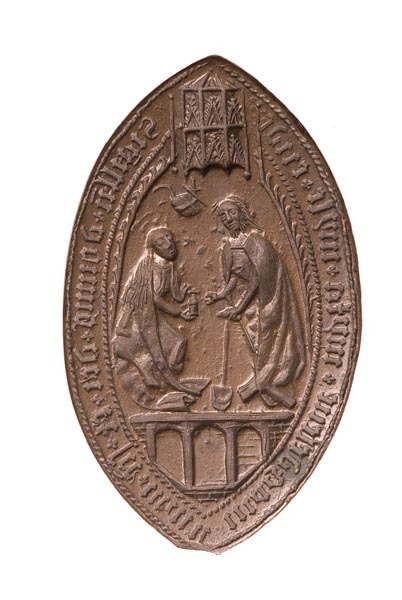 Seal matrices were a common possession in medieval London and throughout medieval England because they produced seals when wax was pressed into the mold of the matrix.  The wax seals were employed to authenticate documents such as deeds, contracts, and payment receipts. Seal matrixes such as this one from St. Mary Magdalene Leper Hospital in London also demonstrated the authority of the matrix owner, which was communicated in part through the hospital’s choice of imagery to place on its seals.  During the middle ages, all religious houses, businesses, and aristocratic or wealthy families had personalized seal matrices so as to signify their presence when sealing agreements on documents. Often times the motif depicted in the matrix represented the profession or life path chosen by the owners or their family. For example, knights and soldiers often utilized imagery of lions and weapons on their seal's face while bishops often chose imagery depicting God and saintly figures. Many wealthy citizens in London had their own seals, and some followed the practices of the monarchy and landed elites by favoring double sided matrices in order to further broadcast their authority and self-representation.

The design of many seals in this period was often regarded as a metaphor for Jesus and the creation of life in God’s image. The most basic of the metaphors was portrayed through the art depicted on the matrix, wherein a majority of cases God, Jesus, the cross, or a saintly figure appears within the design. When using a matrix to produce a wax seal, an immutable object casts a slightly different seal and impression with each use. Beeswax with tree resin, vermillion, or verdigris formulated the wax used to cast a matrix’s impression. Incorporating any of these additives resulted in different colored waxes to use to cast an impression of the seal upon a document. At times kings and the aristocracy even utilized mercury to create a red seal to show that great care went into the charter to which the seal was attached. Most Londoners purchased or created premade wax tablets long before they were needed, which was more efficient for those who sealed documents often. Whether it be due to the wax, the pressure, or the surface upon which it was pressed, no two seals were exactly alike. Each individual cast differed slightly, which some scholars suggest served as a metaphor for the children of God who are each unique yet derived from his image.

Forged from a copper alloy by an unknown coppersmith or metal worker in the late fifteenth or early sixteenth centuries, the St. Mary Magdalene Leper Hospital seal matrix is vesica or oval in shape and 73 millimeters long by 43 millimeters wide. The alloy which the maker used to create the matrix demonstrates that the hospital intended to use it for administrative processes. Additionally, since financial problems often plagued this institution, the hospital likely chose the alloy as a more cost effective alternative because many seal matrices at this time were made of latten, gold, or ivory. Although seal-makers lacked their own guild one can not understate their importance in medieval London.

The motif and overall appearance of one’s seal matrix was very important, and the heraldic devices engraved within it distinguished it from others. Royalty and the wealthy elite normally contracted with gold-smiths or metal workers in order to forge their matrices. It is also worth noting that coppersmiths and pewterers most likely contributed a great amount to the production of seals in London as evidenced by the vast number of seal matrices which are not derived from precious metals, such as the copper seal matrix of St Magdalene Hospital. Depicted on the matrix’s face is an ornate image of Jesus, who is displaying his wound from the cross while holding a spade in his right hand and the resurrection banner in his left. Alongside the depiction of Christ is the image of Mary Magdalene, shown kneeling before Jesus, offering him ointment to heal his wounds. Impressed upon the seal is the Latin phrase “SIGILLUM DOMUS DEI ET SANCTE MARIE MAGDALENE APUD MYLE ENDE” which in English represents “The Seal of the House of God and St. Mary Magdalene at Mile End.”

From the eleventh century onwards, royal seal matrices often had “sigillum” (originally meaning a picture or engraving) imprinted upon them to create a sense of authority. Derived from the word “signum,” first found on seals of royalty in France during the sixth century, “signum” and “sigillum” soon became a signifier of someone's signature in early England. The original seal or “signum” was represented by a cross being placed next to a person’s name to confirm the delivery or receipt of goods or any other kind of agreement.. Eventually, the practice of signing through use of a “signum” transformed onto some of the first seals from the Anglo-Saxons, for example as seen in the lead bulla or amulet of Cenwulf which had the phrase “obverse + COENVVLFI REGIS reverse + MERCIORUM” imprinted upon its face. Each cross within the phrase represented the king’s “signum” or as it would soon to be come to known as “sigillum.”

Comprised of several buildings, the St. Mary Magdalene Leper Hospital is and was one of the seven Lazar Houses created to accommodate leprosy patients in London. Like most leper hospitals, it was outside the city near Mile End, about two miles east of Aldgate Founded in 1274, the St. Mary Magdalene Leper Hospital was dedicated to Mary Magdalene, the patron saint of leprosy as sister of the leper Lazarus. Drawing on the teachings of the Book of Leviticus in the Old Testament, lepers treated at the hospital were quarantined and forced to live separately from the rest of society. By the late fifteenth and early sixteenth centuries leprosy had begun to wane and although there was a decrease in patients the hospital remained. Like leper hospitals elsewhere, it never had sufficient funding. Patients here endured many hardships and in the sixteenth century were given a royal protection to beg. Scraped to the edge of society, left with no money, and forced to raise funds for themselves, the lepers soon became an annoyance to Londeners. In order to appease those near the hospitals, Edward VI gave £60 to all the leper hospitals around London to compensate for the earlier permission to gain funds from begging.  These funds were received and sent through use of seals, suggesting that the matrix presented here was used to create one of the seals involved in this transaction. 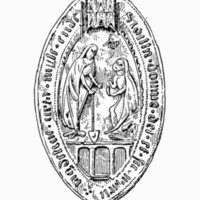 A drawing of the seal of St. Mary Magdalene Leper Hospital at Mile End. It depicts both Jesus and Mary beneath a canopy; Jesus is here portrayed as the savior of the Christians and Mary is shown as the patron saint of lepers. The seal matrix which this drawing is based on came into use in the fifteenth or sixteenth centuries. 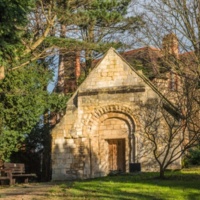 Because St Mary Magdalene was the patron saint of lepers (her brother was the leper Lazarus), many leper hospitals were dedicated to her.  This picture shows what remains of the chapel of the St. Mary Magdalene Leper Hospital in Gloucester.

Brand, Paul. "Seals and the Law in the Thirteenth Century England." In Seals and Their Context in the Middle Ages, edited by Phillipp R. Schofield., 111-20. Oxford; Philadelphia: Oxbow Books, 2015.

McEwan, John. "Making a Mark in Medieval London: The Social and Economic Status of Seal-makers." In Seals and Their Context in the Middle Ages, edited by Phillipp R. Schofield, 77-88. Oxford; Philadelphia: Oxbow Books, 2015.

Peltzer, Jörg. "Making an Impression: Seals as Signifiers of Individual and Collective Rank in the Upper Aristocracy in England and the Empire in the Thirteenth and Fourteenth Centuries." In Seals and Their Context in the Middle Ages, edited by Phillipp R. Schofield, 63-76. Oxford; Philadelphia: Oxbow Books, 2015.

Power, Daniel. "The Declaration on the Norman Church (1205): A Study in Norman Sigillography." In Seals and Their Context in the Middle Ages, edited by Schofield Phillipp R., 35-62. Oxford; Philadelphia: Oxbow Books, 2015.

“Seal Matrix from the Leper Hospital of St. Mary Magdalene, Mile End.” A History of the Tudors in 100 Objects, by John Matusiak, The History Press, 2019.

Steane, John. The Archaeology of the Medieval English Monarchy. Routledge, 1999.