This is the tomb that was created for John Gower. John Gower not only was married in St. Mary Overie priory, but he also lived in it as well. Although not in the original spot that it was during the middle ages, this is the authentic tomb that was made for Gower after his death in 1408. 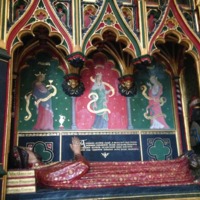