St. Etheldreda’s Chapel is a one-story Gothic-style Catholic church located in the private road of Ely Place in London. The church was built c.a. 1290 CE as a chapel part of a larger estate belonging to the Bishops of Ely just outside the city limits in the ancient hundred of Ossulstone. It follows a rectangular design, constructed on top of an underground crypt with ragstone and dressed in limestone.

The church entrance is accessible from the east side at the road, and features a large five-light traceried late Geometrical window above by two narrow Geometrical windows leading to the crypt. The interior connects a stone hallway between the crypt and inner chapel, which is adorned with stained glass windows depicting scenes from the Old and New Testament.

The current incarnation of the chapel was refurbished in a Georgian style in the late 18th century after much of the estate was demolished by Oliver Cromwell from 1649-1660. The east window and roof were also damaged by German bombings in 1941 and had to be replaced. 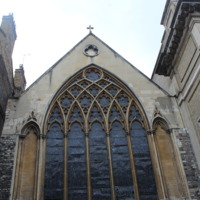