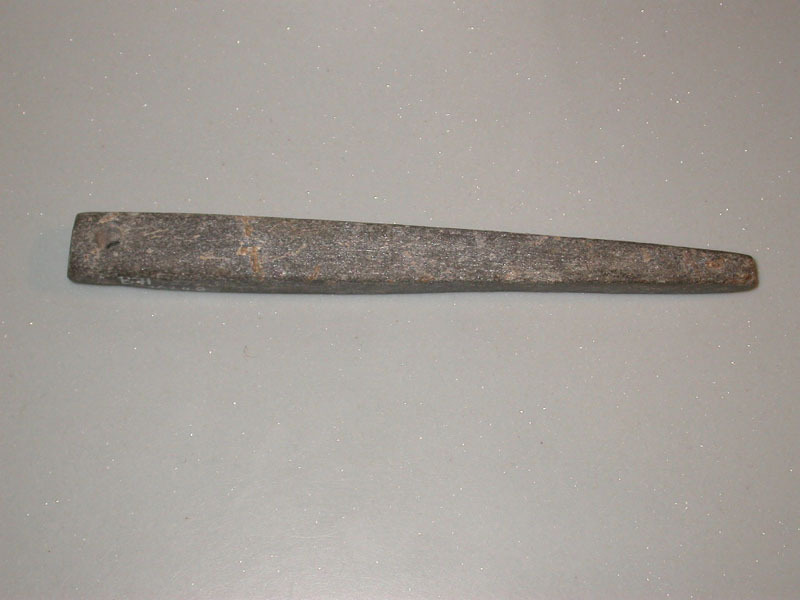 The whetstone, sometimes referred to as a honestone, was a common object in medieval London, and it was used primarily for sharpening knives and other blades. This particular whetstone is made of stone that is 145 millimeters in length and 11 millimeters wide. The object is wider near the top and narrows towards the base with a notch at its wider end. It should be noted that whetstones are usually uniform in width at their creation, but become weathered due to use. Whetstones, commonly used as they were, were easily worn down and replaced; this one was brought by merchants to be sold in London markets and was used to the point where its bottom side became several millimeters smaller than its top side. The stone used to make such an object was typically Norwegian Ragstone, which was shipped to London. The type of stone most ideal for whetstone production tended to be hard schist. These types of whetstones were created by specifically using stone that was taken from sections of quarries purposed for the production of whetstones. In general, quarries had access to different types of stone depending on their location, and these stones could be used for different items, mostly depending on properties such as hardness and grains present in the rock.

Medieval people typically used a whetstone to sharpen their knives for use either in cooking or in their craft. Whetstones were not necessarily used by an individual looking for superior quality, but were instead used mostly as a convenient tool for a quick sharpening. This is exemplified by the hole present near the top of the whetstone through which craftsmen could string some sort of cord to tie the whetstone to their clothing, which makes carrying this tool relatively simple. The guilds of London likely used whetstones regularly, as many crafts such as curriers or cooks relied on the rigorous use of blades, which could thus become dull and unusable. However, using a whetstone to finish a freshly made blade was considered inappropriate, as it would not provide the same edge as a proper grindstone would. The grindstone was a much larger instrument, capable of sharpening a blade much more quickly and effectively than a whetstone because of the speed at which one could use it. It was used more in the initial crafting of a blade, but the whetstone was used for regular upkeep. As mentioned, some crafts were displeased with the use of whetstones to finish their products. The Bladesmiths, for instance, of fifteenth-century London were particularly careful about ensuring that their blades were not ruined by others using a whetstone rather than a grindstone. They raised an official complaint about this issue at one point, which suggests that the people in charge of ensuring the sharpness of their blades were slacking off.

A particularly odd use for the whetstone was as a tool for punishment. There are accounts of people who were found guilty of lying and were sentenced to have their head and hands stuck in a pillory with a whetstone around their neck. The origin of this practice is unknown. Such was the case for William Blackeney, who was discovered to be lying about being a pilgrim, a crime because he was coercing people into giving him gifts and other benefits. After being presented to the city officials, he was sentenced to be publicly shamed via the pillory and was forced to wear a whetstone around his neck for having deceived people for several years. Another case of this type was seen in William Hughlot’s punishment for assaulting several people, one of whom was an alderman. Upon his arrest, he proclaimed that the blame should be on the mayor and he proceeded to insult the court. Instead of the traditional punishment of cutting off the hand of a man who assaulted an alderman, he was pardoned and was given the lesser punishment of imprisonment along with being locked in the pillory with a whetstone around his neck. This use of the whetstone is curious, but when considering the duration of an individual’s punishment via the pillory, probably about an hour or more a day, it would seem that this could be an irritating and shameful punishment. 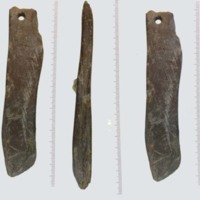 A whetstone made of black slate which bears scratch marks from usage. Also worn on one end and bears a hole near the top. 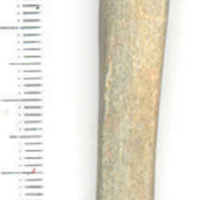 A grey, rectangular whetstone from the early medieval period. This whetstone is well-worn from use and carries a notch near the top for portability.