The word “mirror” derives from the Latin word “mirare” which means “to look at.” From Latin, it translated into the Old French word “mirour.” From that adaptation, the Middle English word became “mirror.” Early interpretations of the word included “a crystal used in magic” and “a person deserving imitation.” The word “case” comes from the Latin word “capsa.” meaning, “to hold.” Mirrors came into play in Greece in the early fifth century. Greek hand mirrors were highly decorated and were geared toward being an accessory more than being a means of examining one’s reflection. Technological advances in glassblowing kicked in during the high middle ages in Venice, Italy, which helped make mirrors clearer and of higher quality.

During the  Middle Ages, mirrors were not seen as commonplace items. Instead, they were an indication of status. Early on, mirror cases were seen as works of art-- not just a mean of seeing one’s reflection. Mirror cases consisted of a mirror encapsulated within two flat round discs. Usually, mirror cases were quite small and could fit in the palm of one’s hand. The mirror within the case was made of glass and big enough to see one’s face. The two flat/round disks appeared in various forms and materials, including ivory, bronze, bone and copper alloys. Ivory, bronze and bone mirror cases in particular were suited for the wealthy, while plain metal or alloy mirror cases were more accessible to the middle class. Women were primarily the ones who owned mirror cases. Usually, they were put on display on one’s person. Women would hang them from their belt or put them in their purses. Often the purses would then hang from the belt. So, mirror cases were seen as an accessory and were proudly displayed as a part of a woman’s outfit and as a mark of status.

Typically, the outer surfaces of mirror cases contained decoration, which consisted of religious symbols, depictions of acts of knightly heroism, romantic figures, and scenes of courtly love. Ivory and bone cases had such imagery carved into them, while copper alloy cases were engraved with punch marks to create decoration. The decorations on mirror cases held great significance and purpose. They could, for example, be connected to the notion of love. Often times when a woman got engaged, she would give a gift to her fiancé or lover. Mirror cases were commonly something wealthy women were able to gift to their fiancés or lovers. Another indication of the value and significance of mirror cases is how often they were included in wills and passed down from one generation to the next.

This particular mirror case was produced sometime during the late thirteenth to mid-fourteenth century. The case was crafted from copper alloy, while the mirror was made from glass. This mirror case measures 80 mm in total with a diameter of 30 mm. Although the mirror has greatly degraded, there remains putty material which kept the mirror attached to the case. Previous to technological advancements in the high Middle Ages, copper alloy mirror cases were not common, whereas bronze, bone and ivory mirror cases were used frequently. The change in technology made copper alloy mirror cases less costly and thus more accessible to middle class citizens. Another indication that this particular mirror case is one of a lower quality lays within the decoration on the copper alloy case. The art work consists of a cross that appears to have been implemented by a series of punch marks. This type of decoration is easier to execute than the laborious carvings that grace the bronze, bone and ivory mirror cases.
-Tatiana DiBucci

"The Rise of the Mirror as Commonplace." Brown University. (Accessed October 20, 2017). https://brown.edu/Departments/Joukowsky_Institute//courses/13things/7306.html. 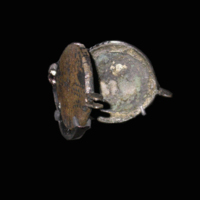 This is a mirror case made out of copper alloy and glass. It was made in the late 13th-mid 14th century. It measures in total 80 mm around and has a diameter of 30 mm.
View item
# Google Analytics Portion 06-02-2016