In the Middle Ages, 'posy' denotes short rhymes or mottos that were engraved on lovers’ rings. The inscriptions on the posy ring were a sign of personal devotion. These rings acquired their name from the French word “poésie,” or poetry. The short sayings which were engraved fit into three categories: religious, supportive, or adoring in nature. They were often associatied with imagery that made them medieval equivalents to poetry. The inscriptions were first on the outside of the rings, but later it became more popular to be engraved on the inside. The reason for this is partlypreference, and partly because it was said that the closer these messages of love were to the skin, the more powerful they would be.  Archaeologists can usually determine the gender of the ring owner based off of how big the ring size is.

Posy rings became popular in the Middle Ages, when they usually had Latin or Norman French inscriptions, although the inscriptions were more commonly in French, the language of courtly love. The repetition of particular inscriptions indicated that the goldsmiths who engraved the rings probably consulted a reference book for popular sayings. If the sayings were more abstract, it was thought to be an individual request of the buyer. Posy rings were usually given as a gift and were expensive since they were made primarily of gold or silver. The ring itself consisted of a plain band, and was named after the poetic inscriptions decorated on them. In order to show inscriptions more clearly, posy rings were engraved with black, and often featured a stone or jewel. If the ring was decorated with an image, a color other than black may have been substituted for the filling. Since inscriptions were most popular on the inside of the ring, the outside of the ring could be decorated, ranging from just a plain band with engravings, to drawings of images, and even stones or jewels. The ability to choose or write a posy became one of the literary exercises expected of an educated person. Friends and family would often help to find the right words.

Posy rings served many purposes. The main purpose of the ring was to honor a commitment, and it often was used as an engagement ring or wedding band. These rings were typically a gift to honor devotion to a loved one, but the rings also served as a symbol of personal devotion to one’s duty and purpose in life. The inscriptions could also be religious to show devotion to God. In medieval times religious worship was a major part of culture and daily life, so it was common for religious figures or texts to be inscribed on the rings, and they were oftentimes inscribed along with romantic expressions. Rulers also exchanged these rings as a sign of support between noble and royal houses. Some portraits show authoritative figures wearing posy rings from their allies, symbolizing support between the two kingdoms. Where the ring is worn is important to its symbolic representation. If the ring is accepted, it should be worn on the left hand. The reasoning behind this is that the left hand symbolizes refrainment from dishonorable acts. If there is a stone or jewel embedded in the ring, the stone will usually face inward, making it invisible to all except the person who wears it.

This particular posy ring is said to have been produced in the late medieval period, in the mid fifteenth century. The gold ring is set with a spinel, a type of ruby gemstone. The gemstone is often called ‘balas ruby’, and is a stone of higher value. Gemstones were often a product of trade, and spinels came from Afghanistan, where there are vast amount of spinel and ruby mines. The message inscribed on the outside of the ring is a love message in French, saying ‘pour amor, say douc’ which means ‘for love, so sweet’.

This ring was found in an archaeological excavation on the foreshore of the Thames River at Bankside. The location where the ring was found might indicate that it was created in England, but it is nearly impossible to trace the ring back to its origin. The measurements of the ring indicate its small size, suggesting that the wearer of the ring was most likely a female. It has a diameter of 20 mm on the outside, a diameter of 17 mm on the inside, and is 6 grams in weight.

Standley, Eleanor R. 2016. "Hid in the Earth and Secret Places: A Reassessment of a Hoard of Later Medieval Gold Rings and Silver Coins Found near the River Thame."  Antiquaries Journal 96, 117-142. Art & Architecture Complete . 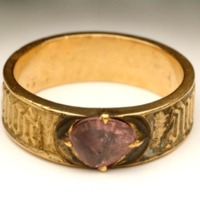 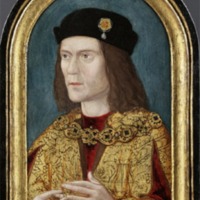 This portrait of King Richard III was created in the 16th century, long after his reign, between 1483 and 1485. His grand status is accentuated by his clothing and jewelry. The ring he wears, on the third finger of his left hand, symbolizes love and… 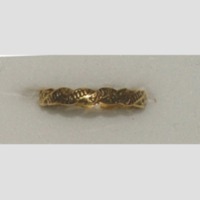 A gold posy ring, created to symbolize two intertwined ribbons engraved with design and 'mercy' in black letters. This inscription is repeated five times, and the inside is engravedmon amour. 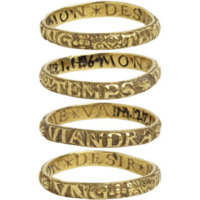