Seals were common items in medieval England, used by many different social classes. They were utilized for a variety of exchanges, the most frequent being land agreements, but seals validated any documents that needed proof of identity. They were also attached to documents for  binding contracts or rental agreements within urban and rural settings. Offices such as the mayor or other officials of London and other cities had seals, or they could be utilized by the clergy, primarily by the bishop to seal court documents or missives between people.

A seal has two parts: the wax seal and the metal matrix, which have different functions. The matrix is part composed of metal or wood and engraved or inscribed with some form of identification. Symbols like flowers, fleur-de-lys, crescents, or other personal identification marks, along with some text, identify the owner. High-status goldsmith often made the high-quality gold and silver seals, while other smiths, such as tinsmiths, tended to make more mass-produced seals from cheaper materials. Mass-produced matrices were easy to make so that an owner would have several different seal matrices within his or her lifetime. A seal was created when the matrix was pressed down into sealing wax, which was made of beeswax with some dye to make it appear red or another color. The seal was pressed onto the hanging part of the document. When the seal wax hardened, the seal was formed and was attached to the documents to authenticate them.

Within London, seals were utilized less for land agreements and more for commercial purposes. Personal seals were usually owned by those of middle to high socioeconomic standing and could be considered a status symbol. Many seals found within London were personal seals utilized for business contracts, so their matrixes had symbols associated with particular trades such as grocers and smiths. Gilds within London also had seals that they used to sign official documents. Other types of administrative seals were those of the different courts in London, which used their seal to authorize official documents. London itself had a city seal, and individual civic rulers such as the mayor also had his own seal. Kings and Queens of England utilized the Great Seal of England to sign their official documents. In medieval England, a seal was a tool to validate documents by a person, family, or private or governmental group.

The seal shown here, however, was not applied in an administrative capacity, for it was a personal seal.  It most likely belonged to Margaret, the daughter of Alfred, who may have been a medieval businesswoman who used this seal o authenticate documents for her business or possibly her husband’s business. She lived during the twelfth century according to the style of the seal. It is 36 mm long and 24 mm wide and made of lead alloy. The lead alloy is an indication of her socioeconomic status because lead alloy was used in the cheaper seals but was still expensive to produce.  It is silver in color and has three details inscribed onto the surface of the seal matrix: a crescent, a star, and the an inscription in Lombardic lettering that reads ‘S’ MARG’ FIL ALVRADI’ meaning the seal of Margaret, daughter of Alfred. It is a vesica-shaped seal, an oval with pointed ends that was common for the personal seals of women.

The Imprint project is using seals to find fingerprints from the middle ages to track the distribution of land and chart economic trends within England during the twelfth through fourteenth centuries. When pressing a seal matrix into the wax sometimes a fingerprint was left behind, and now a team of historians along with forensic scientists are trying to use the fingerprints to see connections between seals and documents of the time.

"Authentication of Legal and Administrative Documents."  - The University of Nottingham. Accessed October 17, 2017. https://www.nottingham.ac.uk/manuscriptsandspecialcollections/researchguidance/medievaldocuments/authentication.aspx.

McEwan, John. "Making a Mark in Medieval London: The Social and Economic Status of Seal-Makers." In Seals and their Context in the Middle Ages. Ed. Phillipp R. Schofield, 77-85. Havertown, PA: Oxbow, 2015. 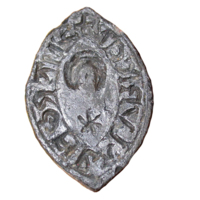 This seal matrix belonged to Margaret, daughter of Alfred in London who may have used it to authenticate her business deals. It is made of lead alloy and is a vesica, the oval shape with pointed ends often used for a woman's personal seal. 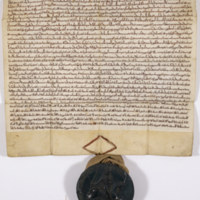 This royal charter granted by King Henry III was sealed with the King's Great Seal, which demonstrates one of the purposes of a seal: to authenticate documents by marking them with a symbol of high power, in this case, royal power. In this charter,… 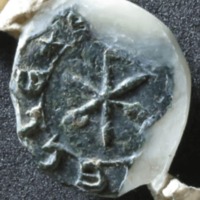 This seal belonged to another woman, perhaps also a business owner. The Imprint Project to trace seal owners through fingerprints shows that she owned several different seals throughout her lifetime. This one happens to be the first one she owned as… 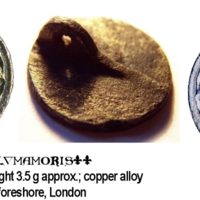 This copper alloy seal was discovered in the Thames in London. The image on the seal is two birds, most likely cormorants facing each other with their beaks touching and a fleur-de-lys in between the two birds with an inscription in Latin of the seal…
View all 4 items
# Google Analytics Portion 06-02-2016