The rosary is perhaps the most popular arrangement of prayers in the non-liturgical Latin Rite. While the evolution of the rosary can be traced back to the hands of thirteenth century Carthusian and Dominican monks, the exact origins of the rosary remain obscure. The word “rosary” is derived from the Latin rosarium, meaning “wreath.” Its etymology is heavily linked to popular piety, as tradition has it that the rosary originated with St. Dominic (c. 1170-1221). In the legend, St. Mary appears to St. Dominic as an apparition and gives him a rosary. The more likely scenario is that the rosary developed gradually between the twelfth and fifteenth centuries, during which various elements of devotion to Christ and the Virgin Mary merged together to form the meditations and devotional exercises still popular today. Repetition of the 100 or 150 Ave Marias and the Pater Noster (The Lord’s Prayer) was directly modeled after the already well-established devotional practices of the Catholic monasteries of the twelfth centuries.

By the end of the fifteenth century, the “mysteries” were standardized into today’s familiar form of fifteen groupings. While the term “rosary” technically refers to a specific arrangement of prayers, it also refers to the string of beads used to aid in prayer. The word “bead” is derived from the Old English bede, meaning “to request in prayer.” Ebed was commonly used to describe the strings of beads used by medieval Christians as a mnemonic device to count and remember their prayers.

Spirituality in the late medieval period, however defined, was not an activity or experience separate from the political, economic, or social life of the community or individuals. Religious rituals, such as recitation of the rosary, were perceived as both individualistic and community-based activities. Recitations were initially used as substitute psalters for an illiterate laity. Archaeological and artistic evidence depict prayer beads being used by members of the aristocracy and the clergy since the early twelfth century. By the latter half of the fourteenth century, the strings of beads for counting the Aves were already in existence, and the “rosary” of recurring, short prayers was popularly counted on the string of beads. Such evidence attests to the rosary’s adaptability, as it was accessible to the literate and illiterate, and extended across gendered, social, and cultural boundaries.

Excavation reports in England from 1974 to 1988 reveal much evidence for prayer bead manufacturing and production in central London. Artisans who made prayer beads were known as Pater Nosterers, and commonly worked in the area surrounding St. Paul’s Cathedral, where they would sell an array of rosaries. Depending on one’s purse and station in life, a rosary in medieval London could be a string of knots on a woolen cord, or a string of beads of wood, glass, semiprecious stone, or gold on a silk thread. The materials used to make rosaries varied greatly, from wood, glass, and silver to bone, amber, and even gold. Bone and wood were the most basic and cheapest materials, and thus rosaries made of these materials were produced in vast quantities.

Measuring 270 mm in length— the diameters of the small, medium, and large beads measuring 10 mm, 12 mm, and 15 mm, respectively — this particular rosary was produced in the late medieval period, sometime during the fourteenth or fifteenth centuries. As the beads of this rosary are made of wood, it may have belonged to someone of lower social standing. Rosaries could have also been decorated with silk tassels, crucifixes, or religious medals— testifying to some of the personal touches owners may have wanted on their rosaries— but this rosary has a comparatively austere design. Its lack of adornments further suggests it belonged to one who could not afford a more elaborate rosary. Additionally, as it was more common for men to use an open-ended, linear form of the rosary, this particularly piece, with its “loop” form, likely belonged to a woman. By the end of the Middle Ages, the rosary became the most ubiquitous item among all believers, from the elites to the peasants. Rosary brotherhoods were formed in the fifteenth century and quickly became popular in medieval London, as there were no membership or admittance fees and both women and men were able to join. Although rosaries became illegal in parts of England by 1549 in the Post-Reformation period, many Londoners continued to use them in private.

Winston-Allen, Anne. Stories of the Rose: The Making of the Rosary in the Middle Ages. Philadelphia: Pennsylvania State University Press, 2005.

http://collections.museumoflondon.org.uk/Online/object.aspx?objectID=object-31669&start=10&rows=1">Rosary at Museum of London 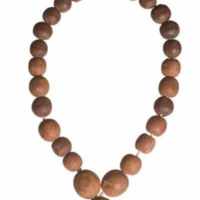 This rosary measures 270 mm in length— the diameters of the small, medium, and large beads measuring 10 mm, 12 mm, and 15 mm, respectively. The beads of this rosary are made of wood, suggesting it may have belonged to someone of lower social… 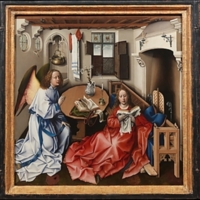 Virgin and Child with Saints Catherine of Alexandria and Barbara 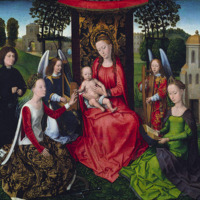 This painting measures 26 7/8 x 28 7/8 in. (68.3 x 73.3 cm) overall. Saint Barbara is shown at the bottom right, reading, as Saint Catherine is sitting at the centre of the frame with the infant Jesus. The man at the left is depicted reciting the… 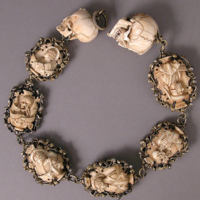 This particular rosary is of German origin and dates back to the late medieval/early modern period. It is composed of ivory, silver, and partially gilded mounts.
View all 4 items
# Google Analytics Portion 06-02-2016