While a common utensil in today’s age, spoons played a significant role in the lives of medieval people as early as the eleventh century. Medieval pewter spoons are an example of how objects can ‘perform’ and have ‘agency’.  Pewter spoons were used not only for domestic purposes, but were also given as gifts and included in wills, suggesting that to medieval Londoners, spoons had an emotional and social meaning beyond their function as eating utensils.

Spoons were used by the elite and common folk; however, the material that constituted a spoon varied over time and by social class. In the early Middle Ages, wood or bone spoons dominated medieval life until silver and pewter took their place around the eleventh century. Silver spoons – an indicator of status and prestige – were commonly used in the elite household. However, for those who could not afford silver spoons, pewter made a viable substitute because of its accessibility. Pewter is a malleable metal alloy composed of tin, copper, antimony, bismuth, lead, and sometimes lsilver.

The manufacture of a silver spoon was by way of hand-forging. The metal was heated so it could be beaten into shape. The rim of the bowl and the tip of the spoon were left thicker in form. The handle was then hammered into shape, progressing from the thickest part of the neck down to where it becomes less thick to create a balanced feel. Because the handle becomes very hard, it must be annealed (heated and then cooled slowly to avoid becoming brittle) several times before it can take its final shape. The bowl of the spoon is then formed by using a tin cake and spoon stake. Pewter spoons were less expensive but made in the identical shape and style of silver spoons – with terminals that took the shape of acorns, lions, apostles, jesters, maiden heads, or horn head-dresses. Common folk also kept their pewter spoons highly polished to look as silver-like as possible.

Whether owned by a peasant or a member of the elite, a spoon was a typical domestic utensil that was used for eating. An archaeological discovery of a fifteenth-century pottage dish found in Southwark can help to infer how pewter spoons were used in medieval London. Six acorn-knopped pewter spoons (that is, spoons with finials made in the shape of acorns) were set around the rim in which commoners consumed porridge in a communal manner. The sharing of porridge bonded people together in a more personal way than sitting formally at a dinner table set with individual plates. In contrast, the elite ate their meals at cloth-covered tables furnished with silver tableware. The elite’s silver spoons were more intricate in detail and were more valuable than pewter spoons. Although the elite’s eating customs were more elaborate, the dining patterns were often imitated across class lines. For instance, large dishes were often served with pewter spoons and other saucers of different sizes to model the eating customs of the elite.

Religious motifs were displayed in the different manufacturing styles of the spoon heads, particularly the “Maiden Head,” which represents the head of the Virgin Mother and the “Apostle” head, which commonly came in a set of thirteen. Twelve of the spoons represented the twelve apostles, and the last remaining head was the master spoon which signified Christ. The pewter spoon commonly employed religious contexts, regardless of socio-economic class. These sorts of spoons with figure heads were given to godchildren as christening gifts. The baptismal spoon was meant to resemble the child’s saintly namesake which the child would keep for a lifetime. Like any sentimental gift, the pewter spoon was valuable because it was cherished by the giver and the receiver. The pewter spoon thus helped to solidify family relationships and promoted ties between godchildren and godparents.

Wills and inventories provide greater insight into the value pewters spoons carried and who they belonged to. Given the care commoners gave their pewter spoons, specifically their attention to maintain the pewter spoon’s shiny condition, it is unsurprising that commoners and the elite bequeathed spoons in their wills in order to pass down their most cherished valuables to loved ones.

Although the number of surviving pewter spoons is limited, archaeological finds from Droitwitch, a salt-producing town, may suggest that spoons were used for salt and for other spices like ginger. Other towns in which pewter spoons were uncovered include London, Winchester, York, and Salisbury. Despite the mandate from King Henry VII that the Pewterers’ Guild require spoons to be stamped with a marker’s mark, tracing of pewter spoons’ origins is still difficult.

This English spoon (now in the British Museum) is dated around the fifteenth century. It is 6.4 inches in length and is made of pewter. This spoon has an unidentified marker’s mark on the interior of the fig-shaped bowl, displaying letters inscribed on either side of a crowned cross. Although spoons were usually marked on the back or front side of the bowl, it is unknown who owned this spoon and what the inscription means. The shank ends in a diamond point knop which is a common style amongst medieval spoons. However, this pewter spoon is especially rare because it combines a hexagonal stem with a diamond-pointed head. Since this spoon is composed of pewter and not silver, the poorer durability is evident. The long, slender, and elegant shape of this particular spoon was typical of the late medieval period. 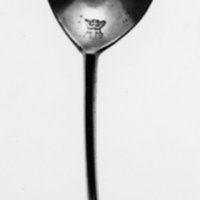 This English spoon is dated around the fifteenth century. It is 6.4 inches in length and is made of pewter. This spoon has an unidentified marker’s mark on the interior of the fig-shaped bowl, displaying letters inscribed on either side of a crowned… 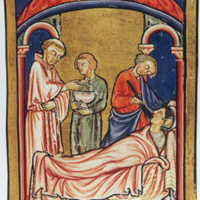 This manuscript illumination is of Saint Cuthbert of Lindisfarne, who is extending his right hand above a vessel that is held by a younger man. On the right, another man is pictured feeding a long, dark-colored spoon full of water to Baldhemus, who… 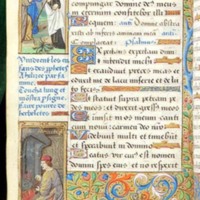 This illuminated manuscript from Paris (c. 1495-1505) shows, on the bottom lower left, a man kneeling and holding a spoon in his right hand to stir the ingredients in the pot.
View all 3 items
# Google Analytics Portion 06-02-2016