The coin as we know it today is very different than that of which was used in the Middle Ages.  When the use of coinage came into practice, it was largely modeled after that of the Roman system. The British penny is a direct copy of the coinage of Rome.

By the fourth century, Roman parts of Britain were part of a dominant economic system that was centered in the Roman Empire.  At the time, gold and silver coins were used to pay taxes, then they were reminted to pay for military service.  The earliest true English coins were modeled after Frankish coins, often called thrymsas, which had become prominent forms of coinage in the sixth century.  This evidence of Frankish influence was later confirmed when the excavation of Sutton Hoo uncovered Frankish coins from this time.  By the end of King Edgar’s reign in about 973, a uniform type of coin with the design of the king facing the left on one side, with a cross surrounded by a circle on the reverse side, replaced the various types of coinage that had been in circulation.  It was the first time that every coin in the kingdom was minted, and it would include the name of the moneyer and the town where he worked.  From then on, new designs would frequently be developed.  By the beginning of the eighth century, mass production, circulation, and use of coinage reached an impressive high.  The sceattas, as they were called, were produced in England, the Netherlands, and Frisia.

The weight of the Anglo-Saxon penny had varied throughout the years, and many archaeologists thought it was due to the poor manner in which the coins were minted.  It seems, however, the varying weight of the penny was done deliberately; its weight was reduced by as much as 40 percent, and then changed again the next time it went into production, as there were no standardization practices for coin production.  The weight of the penny continued to change until established and uniformly set at about 1.36g by William the Conqueror.

In 1279, the archbishop of York was granted two dies “of the king’s special grace.” The grant came with some limitations, for the two dies were only used twice, both during the reign of Edward I.  In these instances, the archiepiscopal mint remained open for a short time, as the coins, with an open quatrefoil in the center of the cross on the reverse side, were the only ones of its kind struck.  The mint of the Bishops of Durham, who had quasi-royal rights, was in operation throughout the reigns of Edward I, Edward II, and Edward III.  A grant of three dies was renewed every time there was a new bishop, as well as when there was any change in coinage. The bishop often renewed one or two dies while the third was still in abundance.

Mules, coins that are struck from obverse and reverse dies, and are not engraved at the same time, were very common in the medieval period.  Edwardian coins can be detected because of slight changes in lettering.  Mules are most common in the London mint because of the large number of dies that were always in stock.This particular coin, found at the Museum of London, depicts the head of Edward II, which appears on the front side of the penny.  A hoard of silver pennies of Edward II were found in Dunfermline in Scotland, most likely deposited there because of the war in Scotland. Edward II’s coins were minted at Berwick, Canterbury, Durham, and London.

Brown, Thomas. "On the Ancient Caledonian Forest in the West of Scotland." The Edinburgh Philosophical Journal 16 (1834). 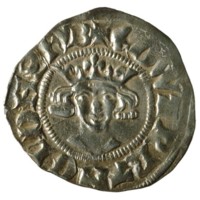 This particular coin, found at the Museum of London, depicts the head of Edward II, which appears on the front side of the penny.  A hoard of silver pennies of Edward II were found in Dunfermline in Scotland most likely due to the war that had been… 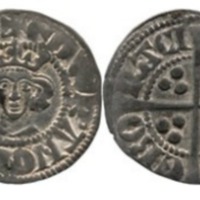 The penny is of Edward I’s reign.  On the obverse is the crowned, beardless bust facing, with drapery around the neck.  The reverse is a long cross with three pellets.
View all 2 items
# Google Analytics Portion 06-02-2016