Blackfriars, located in the southwest corner of central London, originated as a Dominican friary founded in the year 1278. The name Blackfriars comes from the color of the robes that the Dominicans wore.

In order for the Dominicans to build their new establishment, several changes had to be made to the surrounding area. For one, Edward I had to approve the leveling of the Montfichet and Baynard Castles, as well as the demolishing and rebuilding of the city wall further west. According to Nick Holder, the movement and expansion of the friary required the purchase of several buildings from the neighboring parish of St. Andrew. The plot that the Dominican friary maintained consisted of roughly eight acres.

Holder has described Blackfriars as being “built in a typical medieval way.” The original friary was built on a deeply entrenched foundation, which consisted of mortar, ragstone, and chalk. The walls of the church were built of ragstone blocks, and had a width of approximately three feet, with Reigate stone for quoins, the external angles of a wall or building, and other architectural details.

The measurements of the church were 19.7 meters in width, and the floor plan consisted of seven to eight bays which were each about 15 feet wide. Other structures at Blackfriars included five chapels, which were built between the years 1436 and 1502. These chapels included a Lady chapel, a chapel of the Virgin, a Pardon chapel, a chapel of St. John the Baptist, and the chapel of St. Ann. Lastly, the grounds also included a central tower located over the nave and the choir.

During the time of the original friary, the grounds were used for several important government occasions, such as meetings of Parliament. One major historical event hosted by the Black Friars was the divorce hearing between Henry VIII and Catherine of Aragon in 1529. In the year 1538, Henry VIII dissolved the friary, and the grounds and buildings were sold off. One notable buyer was James Burbage in 1596, who purchased the grounds for the creation of the Blackfriars theatre. Blackfriars burnt down in 1666, during the Great Fire of London. The building, however, was reconstructed, and still maintained today. Now, tourists can see the reconstructed version of the friary, as marked by a plaque outside of the location. Along with the reconstructed version of the friary, a piece of wall that may have been a part of the original construction can be seen on the grounds, maintaining a small part of the original history of the building.

Holder, Nick. “The Medieval Friaries of London: A Topographic and Archaeological History, Before and After the Dissolution,” PhD diss., University of London, 2011.

Inspiringcity, “The Black Friars and the Grey Friars, Medieval Monasteries of London and Where to Find Them,” Inspiring City (2014): accessed March 13, 2015. 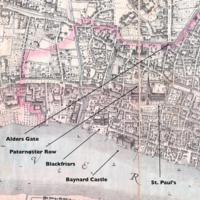 This image displays a labeled map of the Ludgate Blackfriars, along with several other surrounding establishments. 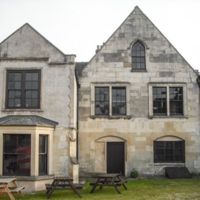 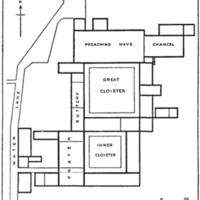 A layout of the original Ludgate Blackfriars, before the dissolution in 1538.
View all 3 items
# Google Analytics Portion 06-02-2016