In the early thirteenth century, Elias, Vicar-General during the lifetime of St. Francis of Assisi, dispatched nine Brothers to England. Four from nine of the Franciscan friars— Richard Ingworth, Richard of Devon, Henry de Trevizo, and Monacatus— made their way from Dover to London. Upon their arrival to the City, they had initially rented a house in Cornhill owned by John Travers, sheriff of London. Others steadily began joining the original four. Eventually, the Franciscans of Cornhill had to find new living quarters, as their numbers had grown too large for their small house. In the summer of 1225, the Franciscans settled in the parish of St. Nicholas in the Shambles. The new site, also known as the Greyfriars Christ Church, was close to Newgate in the ward of Farringdon Within, situated by the City wall, and located on land granted by John Iwyn, a citizen and wealthy mercer of London.

The friary seems to have enjoyed good relations with Londoners. During its early days, the monastery received many donations and anniversary payments from London’s wealthy citizenry. Construction of the church at Newgate cost a total of £200 and was built from funds mainly provided by William Joyner, the Lord Mayor in 1239. Forty-four prominent London citizens also contributed to the construction of the chapel, including Walter Potter, an alderman and sheriff in London in 1269 and 1272, who built the chapel’s chapter-house and donated all the brass furnishings for its kitchen; Henry le Gayles, mayor of the City in 1274, who contributed funds for the nave of the first church; and the Basings and Frowyks, two prominent London families, who supplied the funds for the church’s water supply.

Benefactors of the fourteenth century included nobility as well as the civic elite. When the church was rebuilt on a much larger scale, a century after the arrival of the first Franciscans, Queen Margaret bought the extended plots of land necessary for expansion and gave 100 marks to the construction of the new building. Other nobles who assisted in the building of the new church included John de Bretagne, the earl of Richmond, who donated £300, a gold chalice, and several carpets; Gilbert de Clare, the earl of Gloucester, who donated several wooden beams; Mary, countess of Pembroke, who donated £70; and Margaret, countess of Gloucester, who donated £26 to the building of the altar. The new stone church, which was consecrated in 1326 and completed in 1327, consisted of a minimum of eleven altars, glazed windows, and two chapels, one for St. Mary and the All Hallows and the other for St. Francis and the Apostles. Measuring 300 feet (91 meters) in length and 89 feet (27 meters) in width, it was the second largest in London after St. Paul’s.

From the time of the establishment of the Franciscan Order in England, in the thirteenth century, the friars were welcomed with generosity, especially in London. Testament to the Grey Friars’ growing popularity is the large number of London Franciscans that continued to join the order, reaching a peak of about ninety in the early fourteenth century. In fact, the building was enlarged even further in 1360 to accommodate the growing number of friars. There are several reasons for their popularity. The growing unpopularity of the Benedictines was one major reason, for the Benedictines were often seen as too wealthy, overly preoccupied with their luxurious surroundings, and disconnected from their religious duties. The friars’ observance to both personal and institutional poverty also seemed to impress a large portion of Londoners.

The influence of the Grey Friars continued to grow in the latter half of the fourteenth century. Several prominent citizens chose the Greyfriars Christ Church as their place of burial, including Queen Marguerita of France, the second wife of King Edward I, Queen Isabella, wife of King Edward II, Queen Eleanor of Provence, wife of King Henry III, and Queen Joan de la Tour of Scotland, daughter of King Edward II. It was essentially this association with the rich and powerful that became the downfall of the Grey Friars. For the majority of the fifteenth century, the Franciscans seemed to prioritize good relations with the nobility over their spiritual duties. They had even abandoned their grey-colored habits, only to return to them in 1502. Nevertheless, the friars had not yet lost all their credibility in London. In 1508, for example, the Mayor and Aldermen established that patrons of the Greyfriars Church were to pay yearly visits to the site on the Feast of St. Francis. In 1522, the friars began hosting yearly dinners for the high-ranking officials of the City.

The London Franciscans did not seem to face much trouble in the early years of the Reformation period. In the 1520s and 1530s, the officers of the Greyfriars Church largely supported the religious changes and aligned themselves with Crown policy and reform. In 1538, however, the monastery was quickly dissolved by Thomas Chapman, an agent of Thomas Cromwell. On November 12 of that year, all twenty-six members of the order signed Chapman’s Deed of Surrender, declaring that their grey habits and other rituals did not constitute “Christian living.” It is probable that the brothers signed the Surrender unwillingly. The dissolution of the monasteries had a massive impact on friaries and churches of this period, and the Greyfriars Christ Church in particular suffered heavy damage. Tombs disappeared, monuments were defaced, marble columns were sold, and golden altarpieces were stolen. The brothers were also forced to flee from the country.

In 1546, sections of the friary church were sold off to investors when the Crown granted that the building serve as the center of a new parish. Another section of the former friary was given over to the City of London to serve as a new secular orphanage and school (Christ’s Hospital) in 1552. After it was burned in the Great Fire of 1666, the church suffered major damage once again during the Blitz in World War II when, on 29 December 1940, a firebomb struck through the roof and into the nave of the church. Only the tower and four main walls remained, smoke-scarred and unstable. The church was never rebuilt even after sustaining a great amount of wartime damage. Today, rose garden beds sit alongside ten wooden towers where the original medieval pews once stood. The avenue of wooden towers, representative of the original thirteenth-century church towers, marks the locations of the former nave.

Holder, Nick. “The Medieval Friaries of London: A Topographical and Archaeological History, Before and After the Dissolution.” PhD Diss., Royal Holloway University of London, 2011. 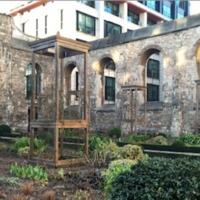 A garden covers the space formerly occupied by the Greyfriars Christ Church. The original site was not rebuilt after its destruction in 1666. The avenue of wooden towers, representative of the original thirteenth century church towers, marks the… 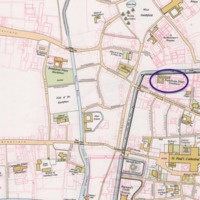 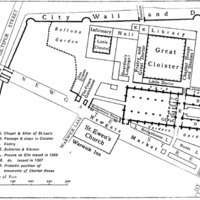 This plan was drawn in 1617, apparently from material dated seventy years older. In architectural detail, it depicts the gardens in the northeast corner, as well as the plan of the Newgate and Shambles market.
View all 3 items
# Google Analytics Portion 06-02-2016