An alembic was an apparatus, usually made of two vessels connected by a tube, which was used for the distillation of various substances, mostly liquids. Here, distillation was the chemical process by which certain constituent components were extracted from liquids through heating, condensation, and subsequent collection of the condensed liquid after it has cooled. The word alembic can be used to describe both the entire apparatus and part of the apparatus in which the condensation occurred. Alembics made of pottery and glass were used in the medieval and early modern periods to distill alcohol (a process that likely developed first in Italy in c. 1100) and mineral acids (the two most popular being nitric and sulfuric acids). They were used in households to make spirits or medicine, in the workshops of alchemists for a variety of experiments, and even in the process of assaying, which determined the metallurgical properties of metal or ore.

The first use of the word in a medieval context dates back to the fourteenth century, from the middle French alambic, which in turn was adapted from the Latin alembicum, although the root likely derived from the Arabic al-anbīq (a combination of the Arabic article al with the Greek word ambikos, meaning bowl). The art of distillation originated in the eastern Mediterranean, though when it came to England is unknown. Alembics made of pottery were at least known in the time of Geoffrey Chaucer (1343-1400), who described “an erthen pot…ycovered with a lampe of glas” in the Canon’s Yeoman’s Tale from the Canterbury Tales, but medieval references remain sparse. The earliest archaeological evidence of distilling equipment in England dates back to the late thirteenth century. Because of the alembic’s association with alchemy, which was the “chemistry” of transforming materials (with a particular emphasis on the alchemist’s quest to find a universal elixir or transforming base metals into gold), there are no shortages of sixteenth-century manuals on the alembic’s function and purpose, and references to them also proliferate in sixteenth- and seventeenth-century household accounts that refer to “stills” or “lymbecks.” Alembics have been found in places such as Nottingham, Gloucester, Oxford, and Nuneaton (Warwickshire). In London, we have remnants from Fenchurch and Surrey Streets, and later sixteenth- and seventeenth-century evidence from Gresham and Addle Streets, and Lambeth Hill.

The entire alembic, which is also called a still, consisted of three parts, each with its own function. First, the gourd-shaped vessel, called a cucurbit, was placed over a fire. Second, the vapors from the boiling liquid in the cucurbit condensed into the dome-shaped alembic, which also had a spout. Third, the condensation would run down from the alembic and into the second vessel, called the receiver. The alembic itself, as part of the entire apparatus, had four distinct parts: the dome, collecting-channel, rim, and spout.

This particular earthenware alembic, dated to the late fifteenth or sixteenth century, was excavated from Fenchurch Street, and likely made by a local potter, given that access to a kiln was necessary to manufacture it. It has a rather unique thumb-print design that runs like a V-shape down to its curved spout. It is cone-, rather than dome-, shaped, which may reflect a specific distilling use. It measures 178 mm (or 7 inches) in height, 150 mm (or 5.9 inches) in diameter, and 175 mm (or 6.8 inches) in width.

Forbes, Robert J. A Short History of the Art of Distillation: From the Beginnings Up to the Death of Cellier Blumenthal. Leiden: E.J. Brill, 1948; reprinted 1970. 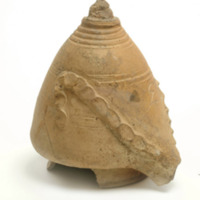 An alembic was an apparatus, usually made of two vessels connected by a tube, which was used for the distillation of various substances, mostly liquids. The word alembic can be used to describe both the entire apparatus and part of the apparatus in… 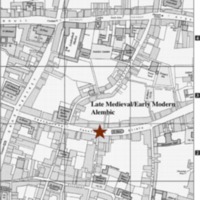 This is a 1520 map upon which I marked, with a red star, Fenchurch Street, since that is where this alembic was excavated. 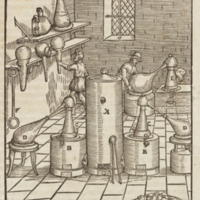 In this woodcut from Lazarus Ercker's Beschreibung aller furnemisten mineralischen Ertzt vnnd Bergtwercks arten ('Description of the Principle Mineral Ores and Methods of Mining'), published in Frankfurt-am-Main in 1580, one may see how the alembic… 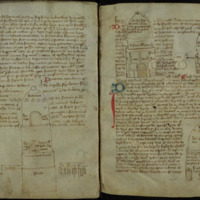 These MS folios show fourteenth-century drawings of furnaces and, on f. 28r, a still with a cone-shaped alembic. These drawings appear in a book about alchemy.
View all 4 items
# Google Analytics Portion 06-02-2016