In medieval London, shoes were an integral part of daily life. Overall, women and men wore the same styles of shoes and boots. For example, according to the sizes of shoes found at Baynard’s Castle, both men and women in medieval London wore below-the-ankle shoes and full boots in the late thirteenth century. This aspect of London culture was most likely a result of the need for simpler shoes that would not interfere with daily work. That being said, shoes were probably more useful indoors, while boots were more appropriate for outside labor. Unlike the finds at other sites, a large number of fourteenth-century shoes recovered at Baynard’s Castle were below-the-ankle shoes, and few shoes at this site have been repaired, which suggests that these shoes may have belonged to members of the upper class or even to the Royal Wardrobe. In addition, many medieval shoes have long poulaines, or long pointed toes that are stuffed with moss or hair. Poulaines were primarily worn by wealthier Londoners. In fact, in 1463, legislation was passed that allowed only the aristocracy to wear poulaines over two inches in length. After two years, legislation declared that no Londoner was allowed to have poulaines over two inches. As for younger Londoners, children’s shoes have been recovered for children between the ages of one and twelve. However, due to the high rates of infant mortality and the possibility of shoes being passed down, it is unclear how often children wore shoes or how early most children started to wear shoes. In this way, style and use of shoes were culturally contingent upon a variety of factors that included age, gender, and class.

Like most towns in medieval England, London had its own shoemakers, also known as the cordwainers. London’s Cordwainers’ Company existed by 1272, and guilds such as these contributed to the increasing standardization of shoe construction in later centuries. However, some aspects of the craft, such as sizing, continued to be under the control of the individual cordwainer. Most cordwainers at this time worked in the corveiseria, which was near Cordwainer Street, south of Cheapside. These cordwainers bought their leather from tanners, who purchased goat, deer, and calf hides from butchers. Some of the cordwainers’ most important innovations were making shoes to become more waterproof in the mid-twelfth century. By the fourteenth and fifteenth centuries, Londoners began to wear overshoes, called pattens, which protected the foot and the shoe from the wet ground. Cordwainers were also an important part of the economy in other major English cities, such as Oxford. Unlike cordwainers, cobblers worked predominantly with repairing secondhand shoes to sell to the poor, but cordwainers soon took over this aspect of the shoe business as well. The shoes crafted by medieval London’s cordwainers have been excavated from multiple sites in London, such as Seal House, Trig Lane, and Billingsgate.

This late fourteenth-century shoe is constructed for the right foot of an adult, and moss was stuffed into the front of the shoe to reinforce its point. Like most shoes in medieval London, this shoe is made of leather. The leather was originally either a dark shade of brown or black. The shoe is 255 millimeters long, has a tread of 80 millimeters, a seat of 65 millimeters, and a height of 50 millimeters. The sole has two sections, and the back quarter of the shoe is no longer connected to the rest of it. Fashion trends for shoes such as this one generally lasted for one century before changing. The side-laced boot, however, was so useful for working that it reappeared in several different centuries. Decorations on shoes were fairly rare and normally found on the shoes of wealthier Londoners. The most common decoration on shoes was the vamp stripe, which went from the shoe’s mouth to the toe. Saints, kings, and even the Virgin Mary were depicted with vamp stripes on their shoes to indicate their significance and status. Such figures were also depicted with intricately embroidered shoes. In these ways, different shoe styles were known and well-represented in medieval London society. 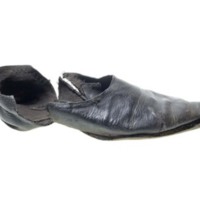 Made in the late fourteenth century, this black leather shoe is 255 millimeters in length, which indicates that it probably belonged to an adult male in medieval London. Because the mouth of the shoes rests below the ankle, this shoe is best-suited… 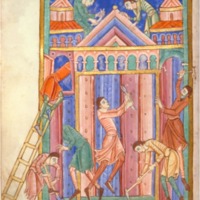 This is a depiction of Thieves Breaking into the Burial Church of St. Edmund from the Life, Passion, and Miracles of St. Edmund. The shoes on the feet of the thieves are simple below-the-ankle shoes with simple decorations, such as the vamp stripe on…

The Shoes of a Grotesque Figure from the Luttrell Psalter (from The British Library, MS 42130 f. 13) 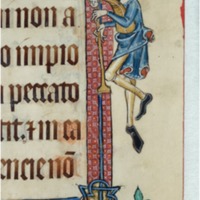 This grotesque figure is positioned in the upper right margin of a medieval manuscript. The pointed tips of his black shoes would have been highly fashionable in the fourteenth century when the manuscript was made.

A Shoe under Inspection by a Museum of London Volunteer 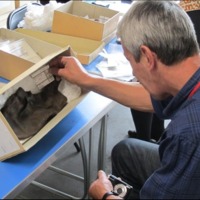 In this photo, an individual in the Volunteer Inclusion Project at the London Archaeological Archive and Research Centre prepares to take a picture of a medieval shoe. The leather shoe is a dark brown color. From this angle, the shoe appears to have…
View all 4 items
# Google Analytics Portion 06-02-2016