Spectacles, or reading glasses, were present throughout the medieval period in Europe. Spectacles may have been initially invented in Italy at the end of the thirteenth century.  The etymology of the word “spectacles” dates back to these Italian roots. When eyeglasses were first produced, they were known as iteros ab oculis ad legendum or “glasses that are for reading.” This slowly evolved into the words occhiali and occularia.

Physical evidence for the use of spectacles during the Middle Ages is limited. By examining works of art, however, historians can gather and deduce the ways in which spectacles were needed and used. The primary use for spectacles during this time period was for reading. During the fifteenth century, lay literacy expanded as books and pamphlets became more readily available in print, courtesy of the printing press. This new popularity for books led to an increase in the production of spectacles for people who may not have previously needed them.  An early example of a work of art depicting spectacles is a sequence of frescoes by Tommaso da Modena in the Basilica San Nicolo in Treviso, Italy, in 1352. In this painting, a Cardinal is seen writing and wearing a pair of riveted spectacles.

In England, spectacles began to be imported by the thousands during the fifteenth century, making spectacles more common. They were often imported from Florence, which was the most important production center for spectacles at the time. Evidence for this large importation can be seen in the fifteenth-century poem, “London Lyckpenny,” which notes “…spectacles for to reede,” put on sale at Westminster Hall. Although many of the spectacles in England at the time were imported, some were manufactured in London itself. Evidence suggests that many spectacle manufacturers in London were actually Dutch immigrants. Professionals such as lawyers, merchants, writers and other members of the literate public were the main consumers of this product. Spectacles were worn to enhance their vision in their scholarly pursuits.

The spectacles on display at the Museum of London were found during an extensive and well-known excavation at Trig Lane in 1975. The spectacles seem to date back to the middle of the fifteenth century based on their “find spot,” which increased their value to archeologists. Although spectacles were relatively common during this time period, it is uncommon to find a pair of these so well intact. With its brown and beige coloring, these bone-framed lenses were most likely made from the metacarpal bone of a bull. These lenses originally would have had convex frames in them. The two halves of the lenses were cut using a kind of divider and then united again in the frames. The lenses were placed in the frames by a copper wire, the latter of which has remarkably survived with the spectacles at the Museum of London.

Spectacles could have been worn in a number of ways. These specific lenses may have been worn in a fashion in which the rims pinched the nostrils and the rivet in the middle were placed at the bridge of the wearer’s nose. In this way, the glasses could be worn hands-free to turn the pages of a book or to hold a pen for writing. These spectacles measure at 65 mm in height and 65 mm in width. 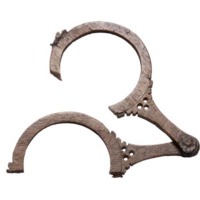 This image is of the spectacles on display at the Museum of London. With brown and beige coloring, these bone-framed lenses are most likely from the metacarpal bone of a bull. Although not currently on the spectacles, theses glasses originally had… 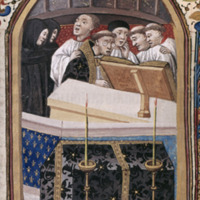 This picture comes from the manuscripts of the British Library. It is a miniature portraying singing monks at the beginning of the “Office of the Dead.” The celebrant in the miniature, wearing the black robe, is wearing spectacles very similar to the… 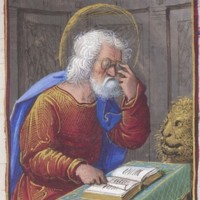 This picture comes from the manuscripts of the British Library. It is a detailed miniature depicting Mark the evangelist using spectacles to read a book. The spectacles Mark has in the picture are ones that need to be held to use. The miniature is of…
View all 3 items
# Google Analytics Portion 06-02-2016