Deriving from the French word broche, meaning “long needle,” a brooch is a clasp with a pin at the back that passes through clothing to hold a garment in place. The pin is secured by a catch to prevent it from unfastening. According to the shape of the front plate, brooches can be categorized as “long” (bow) or “circular” (disc). In early Anglo-Saxon times, the pin and catch were concealed by a plate taking the shape of a plain disc, but became more decorated and varied in shape throughout the Middle Ages. Most brooches at the time were made of bronze, iron, tin, or copper alloy, but some were made of more expensive metals like silver and gold, which only the royal family and wealthy members of society could afford.

For the wealthy, brooches and other forms of jewelry were a way to show off their social status in their communities. In addition to their primary function of fastening clothing, the rich wore decorative brooches purely as accessories. These types of brooches were more elaborate, as they were usually adorned with enamel, semi-precious stones, glass, beads, or bone. In particular, medieval manuscripts of queens of England depict them wearing opulent jewels, where brooches are a central item on display. This suggests evidence of trade with foreign lands, as the Anglo-Saxons would have needed to import exotic gemstones to make some of the more ornate brooches.

Though artistic representations of medieval brooches make it appear as if the wealthier classes only wore them, people from less moneyed backgrounds wore them too.The differences between brooches can be noted by the types of metals used in their construction, and what function they served the wearer. A person of lower social status just used brooches for fastening clothing, whereas a wealthy person could afford to wear a brooch as an added adornment.

For a man, a simple disc-shaped clasp fastened a tunic at the neck. While similar brooches also served the same purpose for women, they were more often worn in pairs on the shoulders to hold back a cloak or shawl. Brooches worn by women were often more embellished than those of men. When women wore a brooch on each shoulder, the brooches were usually a pair. This meant that they would have the same design, and were likely crafted at the same time. We know about how certain brooch styles were gendered because more decorative artifacts have been found at the neck or shoulders of female skeletons. This trend appears consistently in female graves located in regions where fifth and sixth century burials have been uncovered.

Measuring 24 (0.95 of an inch) millimeters in diameter, this Late Saxon disc brooch is made of tin alloy and glass. Circular in shape, the brooch is set with a hazel/grey glass bead made to imitate a gemstone. Sometimes, these beads still have the skin of the metal over top of them – a feature the jeweler would have removed later in the brooch-making process. Stemming from the center bead, there are rings that increase in size, with the last one forming the rim of the brooch. Within each ring layer, there are vertical lines that stretch outward, giving the brooch a textured appearance. The brooch was found on Cheapside near Bow Church, where it was discovered during an excavation of a sewer in 1883. This brooch was found among what appears to be the remnants of a Saxon jeweler’s brooch collection from the eleventh century. Various fragments of pewter brooches, rings, and beads were also discovered, suggesting the site of a jeweler’s shop that had to close or was abandoned since many of the brooches were still in the process of being manufactured.

Though simple, this disc brooch is unique because it is set with a bead to replicate a precious gemstone, and has a ridged pattern. The use of glass is significant, perhaps indicating a high-end jeweler with a wealthy clientele. Aside from the use of more expensive materials for the decorative element found on brooches, the metals which they were made may reveal more information about the society in which the jeweler lived. The jeweler's community may have been involved in trade with other local and foreign countries in order to obtain these precious materials found at the excavation site. 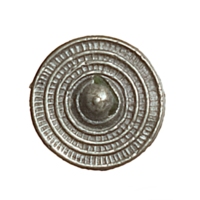 Measuring 24 (0.95 of an inch) millimeters in diameter, this Late Saxon disc brooch is made of tin alloy and glass. Circular in shape, the brooch is set with a hazel/grey glass bead made to imitate a gemstone. Sometimes, these beads still have the…

King Henry I Mourning the Death of his son, William Adelin, after the sinking of The White Ship (detail from Royal 20 A II   f. 6v) 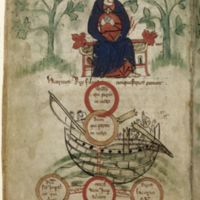 In this illuminated manuscript, Henry I sits on his throne mourning the loss of his son. Below him, there is a genealogical table of his children, Matilda and William, along with a sketch of the sinking White Ship. Henry I's blue cloak is fastened…

Map of Cheapside and Bow Church 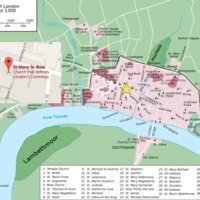 This is a map of the current location of Cheapside and the Bow Church, both of which are just east of St. Paul’s Cathedral. This is the supposed original location of the 1883 sewer excavation, where the glass-centered disc brooch was found along with… 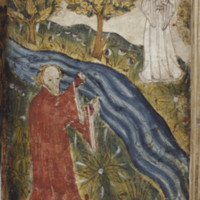 The illumination corresponds to the poem Pearl, where a poet’s deceased daughter reappears to him in a dream and comforts him in his time of grief. The father and daughter are standing at opposite sides of a river, and are both wearing long robes. At…
View all 4 items
# Google Analytics Portion 06-02-2016